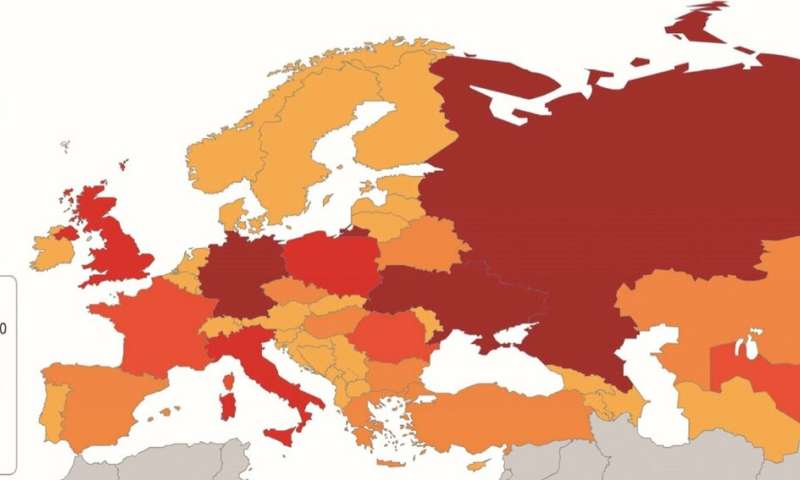 Of the 4.3 million cardiovascular deaths in Europe in 2016, 2.1 million were the result of poor nutrition. The 28 EU member states account for around 900,000, Russia for 600,000 and the Ukraine for 250,000 of these deaths. Every second to third premature cardiovascular death could be prevented by better nutrition. These were the findings of an international research team led by the Martin Luther University Halle-Wittenberg (MLU), the Friedrich Schiller University Jena, the nutriCARD competence cluster and the University of Washington in the USA. The findings were published in the current issue of the European Journal of Epidemiology.

For the study, the team evaluated representative data from the Global Burden of Disease Study (GBD) which were collected between 1990 to 2016. They analysed the prevalence of cardiovascular diseases, such as heart attacks and strokes, in the 51 countries that the World Health Organization (WHO) has designated as “European region”. In addition to the EU member states and other European countries, several states in the Middle East and Central Asia were also included, such as Armenia, Azerbaijan, Israel, Kazakhstan, Kyrgyzstan, Tajikistan, Turkey, Turkmenistan and Uzbekistan. Based on food consumption and other risk factors in the respective countries, the researchers calculated the percentage of deaths attributable to an unbalanced diet, for example, the underconsumption of whole grain products, nuts, seeds and vegetables, as well as the overconsumption of salt.

A comparison of the countries revealed clear differences: In 2016, 160,000 deaths (46 per cent of all cardiovascular deaths) were associated with an unbalanced diet in Germany, 97,000 (41 per cent) in Italy, 75,000 (41 per cent) in Great Britain and 67,000 (40 per cent) in France. In Israel and Spain, however, only one in three premature cardiovascular deaths was diet-related. Specific country profiles were published as part of the study: “In Sweden and Norway, the underconsumption of nuts and seeds is most strongly associated with cardiovascular diseases, while in many Central and Eastern European and Central Asian countries, the low intake of whole grain products poses the greatest risk. Or to put it another way, increased consumption of low-fibre white flour products has led to an increase in cardiovascular disease in recent years. In Albania, Azerbaijan and Uzbekistan, the number of cases has more than doubled in the period under review,” says Dr. Toni Meier from MLU, who heads the study.

“Our findings are crucially relevant for health policy and should be incorporated in the development of future prevention strategies,” adds Professor Stefan Lorkowski of the University of Jena, co-author of the study and spokesperson for the nutriCARD competence cluster. “We must make better use of the potential of a balanced and healthy diet, otherwise cardiometabolic diseases will be the cause of even more preventable deaths in the future.”

The team also found significant differences in terms of age and gender: Men tended to be affected at a younger age, while women were only affected from the age of 50 onwards. In 2016, around 601,000 people under the age of 70 died from diet-related cardiovascular disease, 420,000 of them men and 181,000 women. The highest proportion of diet-related deaths among the under-70s was observed in Central Asia, where the figure was 42.5 per cent. In the EU member states, the researchers identified 178,000 premature diet-related deaths—132,000 of them men and 46,000 of them women—which corresponds to almost 20 per cent of cardiovascular deaths.