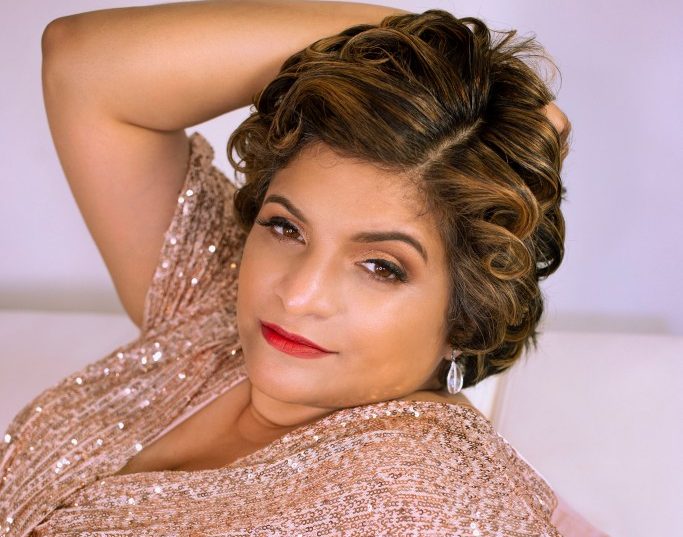 As the hairstylist coiffured my short copper ringlets into a bouncy hairdo and the makeup artist applied an extra layer of lipgloss, I sighed happily at the blissful feeling of being pampered.

I was back where I belonged: on set at a photoshoot, with excitement fizzing through me.

Yet it didn’t fully drown out the echo of the disturbing trauma I had recently endured.

‘The ovarian cyst is cancerous,’ said my dignified and kind gynaecologist in February 2020.

In near-immediate response, I went to vomit in the toilet. I’d already been feeling unwell, but hearing confirmation that I had cancer made my stomach turn.

I’d just had gruelling keyhole surgery to remove the cyst that had been there since my fertility treatment in 2019. I’d already lost my first ovary in 2016 for the same reason, and I’d hoped that this treatment would give me the chance to naturally conceive.

But now this was going away with my second ovary. It was too much to bear.

I asked the doctor if my womb was safe to keep, and when the biopsy came back clear after a few agonising weeks of waiting, I cried with relief – at least I wasn’t losing everything that made me feel like a woman.

Still, I had to shoulder the unbearable loss of my last ovary, even if it was diseased. Conceiving a child naturally had always been a fantasy of mine. As a 39-year-old British Punjabi-Malaysian woman with no kids, infertility is something that is taboo to discuss.

To be a woman barren, unable to conceive naturally or to bleed, felt like having my identity stripped from me.

After my diagnosis, I was too ill to work, but I was still writing poetry, articles, and planning projects for when I would get better.

My husband was very supportive – it had been devastating news for both of us as my wonderful mother-in-law had died of ovarian cancer back in 2009. My family were there in the background, but it was hard for them to see me: we lived in different cities, and it was tough news to digest.

I went into the hospital in April 2020 to have an oophorectomy – surgical removal of my remaining ovary. As well as this, inflamed lymph nodes and a layer of fatty tissue were also sliced away, in case they had also become infected with the disease.

Though I darkly joked to friends that it was like getting free liposuction, in truth, I was terrified. Since it was only weeks into the first nationwide lockdown, I was condemned to the misery of recovering in hospital on my own as my husband was not allowed to visit.

Without ovaries, I was now in the throes of surgical menopause; hot flushes came in hellish waves. I could not have hormone replacement therapy, which is used to alleviate acute symptoms like these, as there was too high a risk of the treatment jolting the cancer back.

Recovery at home was gruelling; everywhere ached, physically and mentally, especially after I managed to wean myself off of the powerful painkillers I’d been prescribed. Then, when my chemotherapy started, three months after the oophorectomy, it was like the devil had jumped into my body and was dancing in my veins.

The cold cap treatment to freeze my hair follicles and stop my waist-length locks from falling out due to the chemo felt like a permanent ice cream headache. And when it didn’t work, and came out dreadlocked in the shower, I was left crumpled and crying.

Having ovarian cancer changed my world. It split my soul and I lived with the constant fear that cancer would spread to my other organs.

Though I’m not in remission yet, I’ve been clear for over a year, following four months of chemotherapy. I’ve never been more aware of how short life is, and how quickly you can lose things that you’ve always assumed are a given.

So, with this in mind, at the start of 2021, I decided to go back to something that made me feel alive when I was younger – modelling.

I first started modelling when I was 18 in 2000: I was 5’7 and a size 8, and as I had always been passionate about fashion, I joined some amazing agencies while at university in Newcastle upon Tyne.

I lived to be in front of the camera; to have my hair and makeup done, to be pampered and to be the centre of attention.

I did fashion shows, campaigns, adverts, music videos and catalogue modelling – it was fabulous. I took a break from it when I started a career as a schoolteacher in 2005, but returned on a part-time basis when I switched to working fewer hours as a supply teacher four years later.

By then, I was a size 12-14, and though I had a few body hangups and self-esteem issues, modelling felt both nerve-wracking and empowering, almost like a form of validation.

When I received my diagnosis, I shoved my love of the camera aside – but at the start of 2021, I was ready to go back. Cancer had taken enough from me, but I was determined to not let it take modelling away for good.

I applied to a wonderful local agency, Stanley Models, and I was flabbergasted when they took me on. This gave me the confidence to apply to other agencies, as well as reach out to old contacts for advice on how to put together a basic portfolio.

It was like having to start from scratch with an entirely new wardrobe, hairstyle and body. I was older now, more hardened by life, and my self-esteem and confidence had been battered beyond belief.

By this point, I was now a size 16 – after all my body has been through, it’s no surprise that I’ve put on weight. The good thing is, I love my new curves and bust – and clearly, I’m not the only one, as I was thrilled to be taken on by some amazing agencies.

I doubted myself at times but deep down I knew I was doing the right thing.

Ahead of my first shoot back in August 2021, I was nervous, and had a touch of impostor syndrome. With short hair and a curvier body, I’d never looked like this as a model before.

But, I came alive in front of the lens.

I could smell the glitz, the scintillating flash of the lightbulbs glistened off my hazel eyes as I arched my back in a sharp black power suit. I smouldered for the camera with my garnet statement lip, I was living the dream as a plus-size curve model.

I came out of the shoot with a fabulous portfolio that secured me representation with some of the biggest commercial agencies in the UK.

So far, I have been an extra on Hollyoaks and modelled for Derbyshire City Council, Conturve Shape Wear, Vice Reversa skincare.

Modelling has helped me love my size 16 body even more.

I did find it hard to reconcile my new body with photos of my slimmer self with longer hair, but I’ve realised I have evolved as a person and that my body has been through a hellish ordeal. I’m just grateful to be healthy enough to pursue my goals.

I have also become aware that I need to take good care of my mental and physical health. When I am on shoots, I have to make sure that I am taking regular breaks, that I’ve had my medication, that I am hydrated and have eaten properly and listen to my body if I get any bad symptoms.

Soon, I’ll be getting some new portfolio pictures, and my agencies have put me forward for some amazing opportunities, so I am excited to see what the new year brings.

It could be a TV advert one day, a campaign or a photoshoot the next. It takes hard work, investment, and dedication but I feel my star is finally beginning to shine brighter than ever before.

When I see my pictures in magazines, on social media and other places I get so giddy and excited, it is the best feeling ever. After my journey with cancer and recovery, I know now that it is vital to love your body, no matter what.

I now go for scans, tests and appointments every six months; they’re mentally and physically exhausting. My symptoms of acute surgical menopause are profoundly painful, but I try to manage them with regular exercise, eating less sugar, a more plant-based diet and meditation.

Through my modelling and writing, I hope to raise the profile and voice of women, especially younger women in minority groups suffering from health issues such as fertility loss and menopause.

The media is very good at portraying a very contrived image of what is beautiful, but it is becoming more inclusive. I think this is important as learning to appreciate your body will help with learning to accept yourself.