Influenza refers to a group of viral infections that affect the lungs, nose, and throat, and can cause complications that, in severe cases, may lead to death. 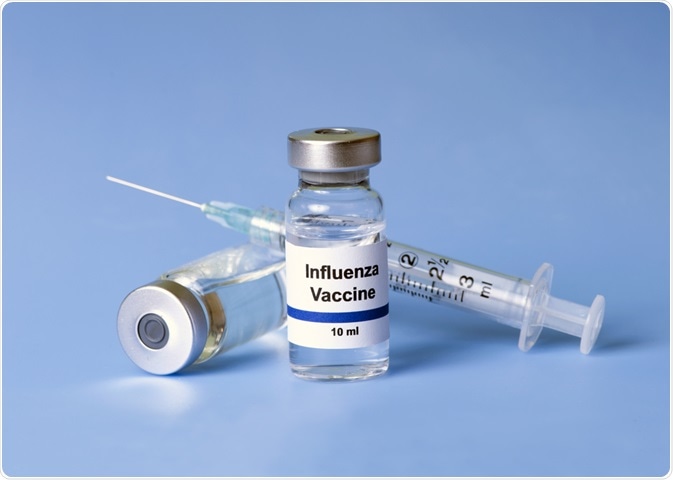 Getting vaccinated is the most effective way to protect at-risk groups such as children, older people, and pregnant women against flu.

The vaccine triggers the production of antibodies against the type of viruses it contains. These may be type A, B, or C, depending on the virus’s core proteins. Type A is further divided into subgroups depending on differences in the glycoproteins haemagglutinin (HA) or neuraminidase (NA) present on the virus envelope. Influenza B is also subdivided into two lineages, both of which usually circulate during flu season.

The B and C type strains generally affect humans, while influenza A affects various species of birds and mammals. Only influenza type A and type B cause severe disease that represents a concern.

Seasonal flu vaccines are designed to protect people against strains that researchers have predicted will be the most prevalent during an upcoming flu season. The vaccines are not guaranteed to provide full protection, but people who are infected following vaccination are likely to experience milder and less long-lasting symptoms than if they had not been vaccinated.

The protection conferred by immunization does eventually wane, since virus strains often mutate, meaning a given vaccine is no longer effective against them. Researchers are therefore busy designing and producing new vaccines every year that people can receive to ensure they are still protected.

Some of the main types of flu vaccine are available in the following forms:

The flu shot, which is administered by needle (usually into the arm), protects against the three or four strains that researchers say will be the most prevalent during a flu season.

For many years, (trivalent) vaccines only protected against three types of flu – the two type A viruses and only one type B. A quadrivalent vaccine protects against the both influenza B viruses, as well as the two influenza A viruses, meaning clinicians do not have to choose which B virus to include and providing better protection for patients. Different versions of the quadrivalent vaccines are available for different age groups, including one that can be given to infants as young as six months.

This trivalent vaccine has been designed and approved specifically for people aged 65 years and older. The high-dose vaccine contains four times the antigen dose that standard vaccines contain, thereby providing older people with even more protection.

Vaccines need to be updated every year

While viruses circulate, they constantly mutate to produce new strains, meaning seasonal vaccines need to be updated every year. Scientists monitor the different strains circulating worldwide to help them predict which ones are likely to be the most common during an upcoming flu season.

They must decide on which strains these will be six months before the next flu season is due, to allow sufficient time for a vaccine to be updated. If a strain that poses a threat happens to emerge too late for scientist to account for it in this timeframe, the vaccine’s protective effect is reduced to less than one-fifth of what it would have been if scientists had had time to include it.

Influenza A – the primary cause of flu

The main cause of flu, the influenza A virus, is divided into two strains depending on the activity of its surface glycoproteins HA and NA, which the virus uses to bind to and enter host cells.

Following vaccination, most of the antibodies a host produces against influenza A bind specifically to the globular head of HA and prevent it from being able to bind to its ligand on host cells.

However, the mutations that circulating flu viruses acquire eventually lead to changes in this HA globular head, meaning the that antibodies intended to specifically bind to it no longer recognize it, and thus cannot protect against the new mutated strain.

This variation means most vaccines are only effective in the short-term, even when researchers update seasonal vaccines to combat the strains they have predicted will be the most prevalent. While the vaccines may offer protection against a given strain one year, the antibodies that vaccination generates will not protect against next year’s new variant strain.

The Centers for Disease control and Prevention therefore monitors data on the strains circulating one year in order to predict which ones should be vaccinated against the next year. However, basing vaccine design on these predictions is one of the main reasons that the effectiveness of immunization varies so much from one year to the next.

Strategies for a universal vaccine

The changes in the HA globular head, and the fact that the antibodies target specific epitopes on it, have led scientists to look for epitopes that are more conserved across various different flu strains. If vaccines could be made that generate antibodies against regions of influenza A that mutate to a lesser degree, this would increase the likelihood of more universal protection against the virus.

A more conserved region on HA that scientist have identified is the stalk domain, which ties the globular head to the viral membrane and is relatively similar across all influenza A strains. One strategy is therefore to make a recombinant HA protein that only contains this stalk domain and not the globular head, but most research exploring this possibility still in the preclinical stages.

Another potential strategy is the design of synthetic viruses with chimeric recombinant HA proteins that have the original HA stalk but a globular head that is found in influenza A strains that do not infect humans. Using the chimeric HA in vaccines would trigger the human body to produce antibodies that only target the conserved stalk, thereby increasing the chance of universal protection.

Significant advancements have been made towards developing a widely applicable universal vaccine against influenza. However, much more research will be needed for a vaccine that can protect against the ever-mutating influenza virus that continues to strike annually and cause the necessary cycle of yearly vaccine updates.

A Universal Influenza Vaccine: How Close Are We? American Society for Microbiology 2019. Angel Corona. Available at: https://www.asm.org/Articles/2019/August/A-Universal-Influenza-Vaccine-How-Close-Are-We