Britain’s unhealthiest mince pies REVEALED: Worst-offenders sold at likes of Asda, Sainsbury’s and Waitrose can have MORE calories than a McDonald’s Cheeseburger

It’s the time of year when pastry-wrapped festive treats filled with dried fruit and spices hit the shelves.

Crumble-topped, puff pastry and vegan versions are just some of the options of mince pies available at the UK’s biggest supermarkets, such as Asda, Sainsbury’s and Waitrose.

But the Christmas-favourites can contain more calories than a McDonald’s cheeseburger and as much sugar as a can of Coca-Cola, MailOnline has found.

Experts warned Britons against tucking into the treats regularly as they contain ‘a whopping amount of sugar which is not good for our waistlines or our oral health’. 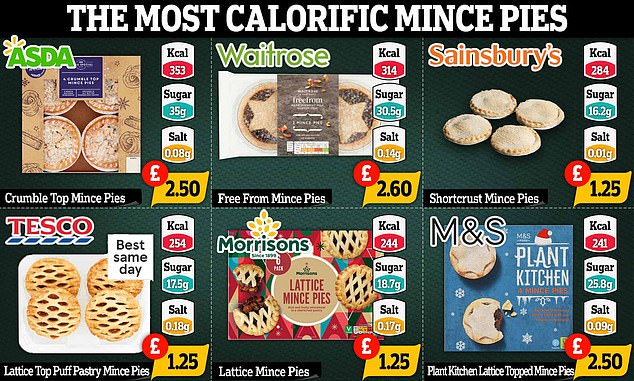 Crumble-topped, puff pastry and vegan versions are just some of the options of mince pies available at the UK’s biggest supermarkets, such as Asda, Sainsbury’s and Waitrose. But the Christmas-favourites can contain more calories than a McDonald’s cheeseburger and as much sugar as a cane of Coca-Cola, MailOnline has found

MailOnline looked at the nutritional content of around 70 mince pies sold at the likes of Morrisons, M&S and Aldi and compared the most calorie-packed option at each.

Asda’s Extra Special Crumble Top Mince Pies, made with three-month matured mincemeat and encased in an orange zest pastry, had the most calories overall — a whopping 353 per serving, along with 35g of sugar. Some of this will be natural sugar.

This is more calories than a McDonald’s Cheeseburger (298) and as much sugar as a can of Coca-Cola (35g).

The Free From Mince Pies available at Waitrose — which are full of vine fruit and cranberry mincemeat and made without milk and gluten — are the next-worst offender.

And it has the equivalent of seven teaspoons of sugar. Eating too much sugar over time can lead to weight gain and tooth decay, regardless of whether added or not.

Sainsbury’s Shortcrust Mince Pies — made with shortcrust pastry and sprinkled with sugar — contain 284 calories per pie and 16.2g of sugar.

This is more calories but around half the sugar content of Mars bar (228 calories and 31g sugar).

The Lattice Top Puff Pastry Mince Pies — filled with spiced currants and sultanas — are packed with 254 calories and 17.5g of sugar.

A large double chocolate cookie would have less of an effect on the waistline — with 194 calories and 12.8g of sugar per snack.

A similar option available at Morrisons — the shop’s Lattice Mince Pies — have 244 calories and 18.7g of sugar.

The nutritional content is similar to a Snickers bar, which has 213 calories and 19g of sugar.

A vegan option from M&S — its Plant Kitchen Lattice Topped Mince Pies — are the most calorie-packed option and its store.

Aldi’s highest-calorie mince pie is lower than the other six supermarkets.

Its Holly Lane Deep Filled Mince Pies contains 235 calories per portion, along with 14.7g of sugar.

This option has the same calorie content as a small portion of McDonald’s fries (237) and as many calories as three McVitie’s Chocolate Digestives.

Dr Linda Greenwall, a dentist in north London and founder of the Dental Wellness Trust, told MailOnline that the items contain ‘a whopping amount of sugar which is not good for our waistlines or our oral health’.

She said: ‘Considering hundreds of children are in UK hospitals having rotten teeth pulled out because of decay caused by sugary foods and drinks — all of which is entirely preventable — this data is rather worrying.

‘We need to see sweeping changes to food marketing and product formulation along with a clearer steer on portion control.’

Dr Duane Mellor, a dietitian from Aston Medical School in Birmingham, told MailOnline that people should not be surprised that mince pies are high in calories, fat and sugar.

Dr Mellor said that those seeking to ‘enjoy the odd mince pie’ without sending their daily calorie and sugar intake soaring could opt for the mini options of the treat, which contain as little as a third of the calories of the full-sized option.

He added: ‘On the other hand, the luxury options which come in packs of 4 with fancy toppings such as crumble can contain even more sugar, with some containing about 7 teaspoons of sugar in an individual pie.

‘So, enjoy the occasional mince pie, maybe not every day and every week through December, and remember size matters.’

Hattie Burt, policy and communications officer at campaign group Action on Sugar, told MailOnline that mince pies are ‘relentlessly’ advertised and promoted ‘well before the Christmas period has even begun’.

She said the products reinforce the need to obesity policies, including a mandatory sugar reduction programme to encourage them to make product healthier.

It comes after a report yesterday revealed that a Government target for food manufacturers to cut sugar content by a fifth has been an ‘abject failure’.

The controversial Childhood Obesity Plan called on companies to cut sugar in products such as breakfast cereals, cakes and yoghurts by 20 per cent by 2020.

But the scheme, which was voluntary, has seen sugar cut by just 3.5 per cent.

In response, campaigners are calling for a ‘sugar tax’ on snack foods like chocolate bars and sweets.