Trials found that prostate cancer in men who had taken olaparib took more than seven months to progress. In comparison it progressed after three and a half months in men who received just hormone treatments. Considered kinder than chemotherapy, final results from the trial should lead to the drug’s approval for prostate cancer treatment in the US and Europe this year. It is hoped olaparib will be available on the NHS in two years for patients with advanced prostate cancer.

He explained: “Our findings show that olaparib – a drug which targets an Achilles heel in cancer cells while sparing normal, healthy cells – can outperform targeted hormone treatments in some men with advanced prostate cancer.

“I can’t wait to see this drug start reaching men who could benefit from it on the NHS, hopefully in the next couple of years.

“Next, we will be assessing how we can combine olaparib with other treatments, which could help men with prostate cancer live even longer.”

Olaparib is a type of treatment called a PARP inhibitor that specifically targets cancer cells with faulty DNA repair genes.

The charity says certain drugs can target differences in a cancer’s genes or DNA that help it to grow. 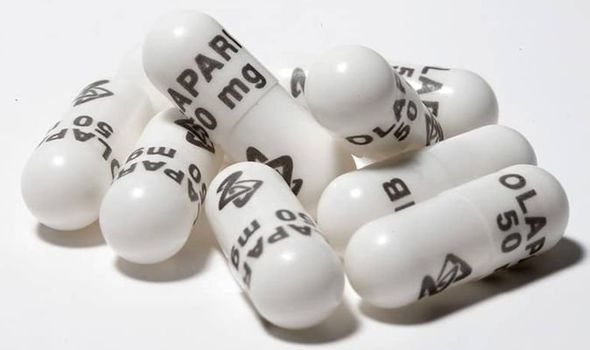 So when drugs stop PARP from repairing DNA damage, the cancer cells die.

The study, funded by AstraZeneca, discovered men with prostate cancers that had faulty BRCA1, BRCA2 or ATM genes benefited most.

Men with an alteration in the 12 other pre-selected DNA repair genes were also helped, it said.

The average overall survival of those men was found to be 19 months, compared with 15 months for patients who had been given the hormone drug treatments.

Scientists say they will need more time to prove conclusively that olaparib patients survive longer, but say the drug is much less harsh than chemotherapy. The most frequent adverse effects were anaemia and nausea, which have been associated with olaparib in the past.

The study was published in the New England Journal of Medicine.