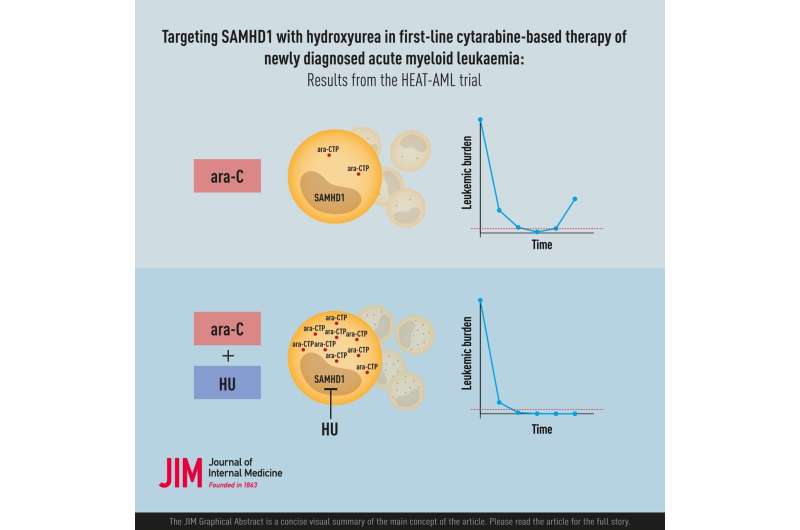 Researchers at Karolinska Institutet, among others, have studied the benefit of adding an established drug as a novel targeted therapy in the treatment of acute myeloid leukemia (AML). The results suggest that the drug hydroxyurea can increase treatment efficacy at a relatively low cost. The research, which was published in the Journal of Internal Medicine, could have significant implications for cancer treatment, including in low-income countries.

Acute myeloid leukemia (AML) is an aggressive blood cancer with high mortality that affects around 350 people in Sweden each year. The 5-year relative survival rate after a myeloid leukemia (AML) diagnosis is 30 percent. One reason for the high mortality is that responses to chemotherapy are often insufficient, and a large proportion of patients relapse a few months to several years after treatment.

SAMHD1, the protein in the leukemia cell, has been shown to act as a resistance factor to the drug cytarabine, which is used to treat AML and other blood cancers. A translational research project, with researchers from Karolinska Institutet and Karolinska University Hospital, showed that the drug hydroxyurea, which inhibits the growth of cancer cells, also inhibits SAMHD1 and thus makes chemotherapy with cytarabine more effective.

The results are based on a study that included nine patients with AML, where the standard therapy was supplemented with hydroxyurea in order to enhance the effect of cytarabine. The study was conducted between October 2020 and March 2021.

“The results from our study are very promising. All patients have responded remarkably well to the treatment and the addition of hydroxyurea has been well tolerated. We have in parallel also validated in the lab that the combination produced a higher concentration of the active cytotoxic agent inside the leukemia cells, and that it was more efficient in inducing leukemia cell death,” says the study’s first author Martin Jädersten, researcher at the Department of Medicine, Huddinge, Karolinska Institutet, and senior physician in hematology at Karolinska University Hospital Huddinge.

It can take over 15 years to develop a new drug, and it is not uncommon for a drug to have a lifespan of less than 15 years. In this case, the researchers were able to go from discovery to the publication of a clinical trial in just five years.

“Hydroxyurea has previously been used in leukemia as a mitigating therapy, but we are using it now for a new purpose—as a modern precision medicine. Since we are able to repurpose an already existing and approved drug, the additional cost per patient will be a couple of hundred kroner, i.e. about the same as a pack of pain relievers. This also means that the treatment is available in less resource-rich countries around the world,” says the study’s last author, Nikolas Herold, researcher at the Department of Women’s and Children’s Health, Karolinska Institutet and pediatrician in pediatric oncology, Astrid Lindgren’s Children’s Hospital in Solna.