Scientists have detected ‘covert consciousness’ in patients lying motionless and unresponsive after traumatic brain injuries, according to new research.

In the not-so-distant future, the discovery may finally give heartbroken families and conflicted doctors some basis for making the impossible determination that a patient is never coming back.

The line between life and death and the definition of ‘brain dead’ has torn apart families, sparked lawsuits and media frenzies and puzzled even the best neuroscientists.

Now, Columbia University researchers have used an EEG brain scan and advanced computer system to listen for subtle neural hints at life, and those with low levels of activity – rather than none – went on to much more full recoveries.

The discovery suggests that the specialized EEG may one day help doctors determine when an unresponsive patient has a shot at recovery, and when a family’s best course of action is to say goodbye. 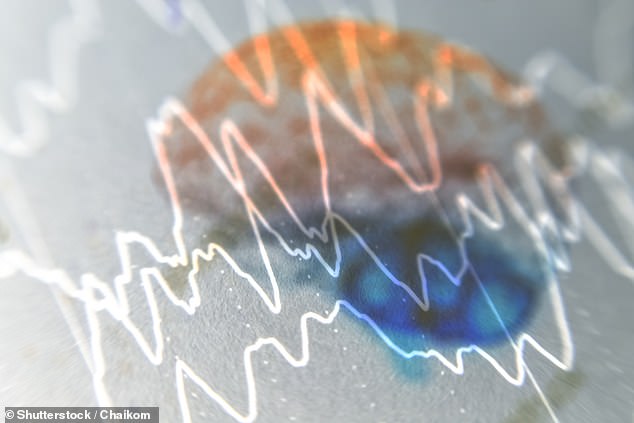 Researchers at Columbia used a combination of an EEG – or electroencephalogram, which picks up electrical activity in the brain – and a machine learning computer program to assess 104 patients.

All of the ICU patients had recently sustained a major injury and were left unconscious and unresponsive.

To test if this most basic level of consciousness is present, doctors will check to see if a patient reacts to any auditory, visual, tactile or pain cues.

A patient will also undergo a test of their brain stem activity, which tests whether or not they will fight to breathe.

The tests are thorough, but still can be traumatic and unclear for families who ware looking at their loved one not as a set of clinical data points, but as a person, who looks effectively and, until recently had memories, personality, and relationships.

But there may be a long lead-up time to such a test, and much uncertainty remains about how much of a patient’s brain activity they really capture.

‘One of the most challenging problems in the ICU involves predicting recovery, and not just survival, for patients who are unconscious after a brain injury,’ Dr Jan Claassen, an associate professor of neurology at Columbia University and lead author of the study.

In 2013, Jahi McMath suffered devastating complications from a surgery to improve her breathing at night.

After the operation at Children’s Hospital Oakland, she bled profusely from her mouth and went into cardiac arrest.

She was declared brain-dead on December 12, 2013, but the family said she wasn’t dead and refused to allow doctors to take Jahi off life support.

The bioethical and legal conflicts over her status stretched on for years.

Last year, Jahi bled out from liver and kidney failure and was finally taken of life support. She died on June 22, 2018.

The legal battle over her parents’ claim of malpractice is ongoing.

‘Since the first studies describing hidden consciousness, we’ve been looking for a practical way to do this in the early days after brain injury, when treatment decisions that affect outcomes are often made.’

Standard EEGs are not sensitive enough to detect consciousness near the line between life and death, but the new method might change that.

The Columbia University team assessed their 104 patients within four days of their devastating injuries.

Sixteen of those patients (15 percent) One in seven had ‘hidden consciousness’ that was detectable with the new advanced technique.

And those patients were the ones the recovered best.

Half of the sixteen went from being unresponsive, to able to follow commands by the time they were discharged from the hospital.

That was double the proportion of the patients with no ‘hidden consciousness’ that were able to do the same at discharge.

Remarkably, one year out from their devastating injuries, seven of the patients who’d showed near-undetectable – but present – brain activity were able to function on their own for eight hours in a day.

Only 12 out of the 84 patients (14 percent) who didn’t have brain activity that could be detected by the highly sensitive EEG had the same level of independence.

‘Though our study was small, it suggests that EEG – a tool that’s readily available at the patient’s bedside in the ICU in almost any hospital across the globe – has the potential to completely change how we manage patients with acute brain injury,’ says Dr Claassen.

‘This study shows that some patients who are unresponsive for days or longer may have cognitive processing capabilities sufficient to distinguish commands, and those patients have a higher chance of recovering.’

His test could mark a paradigm shift and clarify fights over patient lives that rip families in two and end in heartbreak – but it will be some time before it’s standard practice.

The team knows that the test’s accuracy, safety and effectiveness are of the highest importance, and intend to do their utmost to ensure the method is as close to air-tight as possible.