A three-year-old boy has stood up with the help of support for the first time after becoming one of Britian’s youngest stroke victims at just 19 months old.

Ronnie Kerman was found lifeless in his cot by his 40-year-old father, Phil, and has spent the past 16 months in and out of hospital.

Doctors discovered a cancerous tumour and cysts on his brain, caused by a genetic disorder, which had led to a stroke by cutting off his blood supply.

The family said it was their ‘worst nightmare’ and he went on to have a string of surgeries and chemotherapy.

Ronnie, who has a twin brother, Robert, has lost most of his vision and the use of his legs following the stroke.

His family, including mother Louise, are praying that his cancerous brain tumour has shrunk considerably, or even better, gone completely. They await the latest scan.

Despite a long battle ahead, Ronnie seems to be responding well to treatment, and after intense rehabilitation sessions, is able to put weight on his feet. 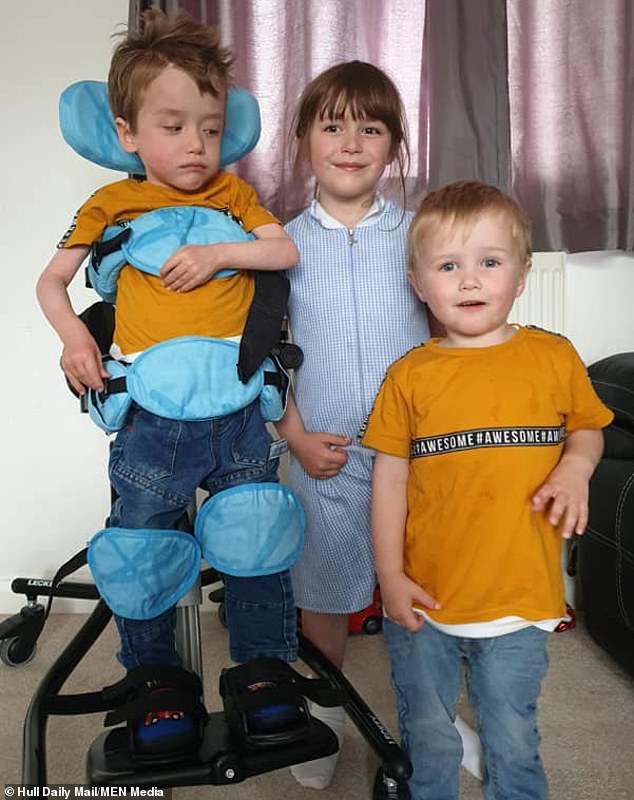 Ronnie Kerman, pictured with his twin, Robert, and five-year-old sister, Emily, was found lifeless in his cot in March 2018 having suffered a stroke. He has stood with support for the first time since after having intense rehabilitation sessions 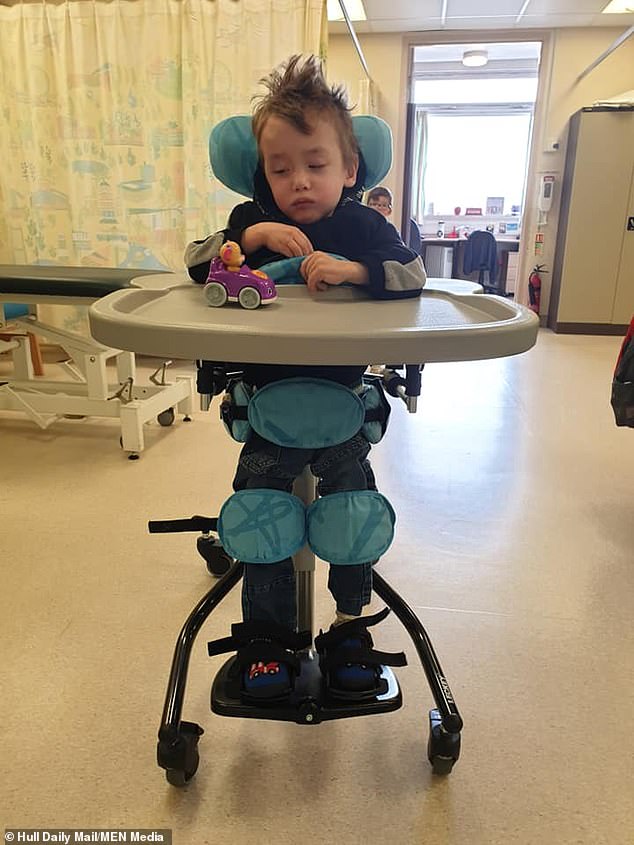 Ronnie Kerman, pictured in hospital, is standing with support for his back ‘unaided’ 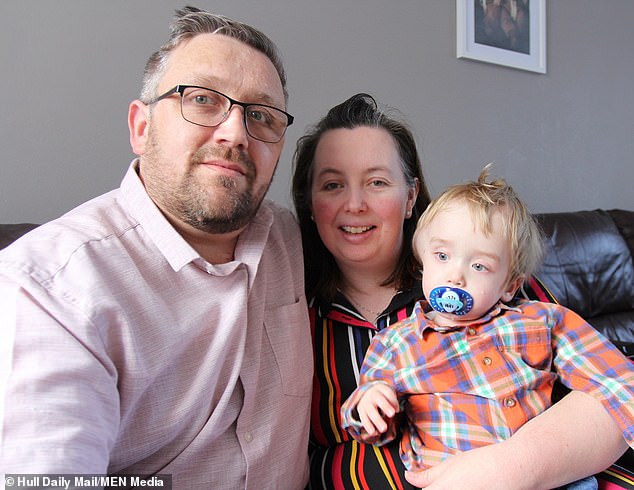 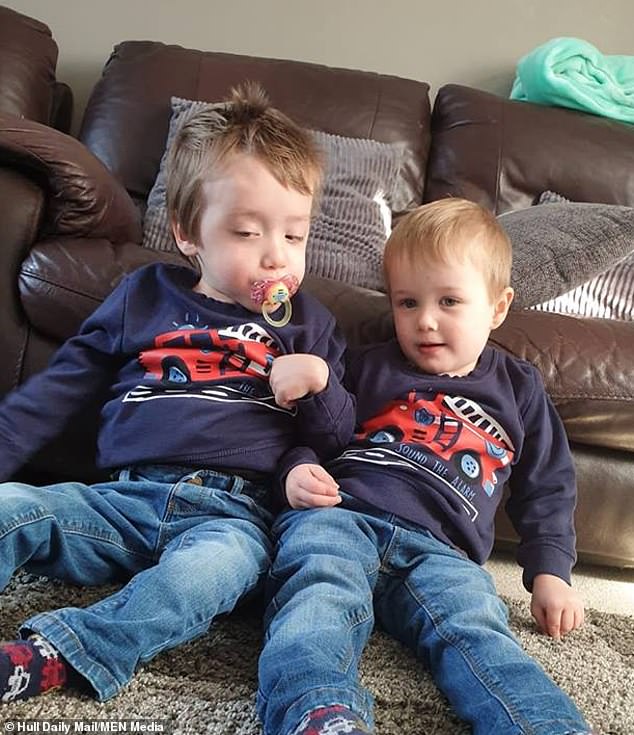 Ronnie (left), who has a twin brother, Robert (right), lost most of his vision and is unable to walk or talk after losing the use of his legs. Pictured at their home in Bransholme

Mr Kerman, of Bransholme, said: ‘We thought it was absolutely fantastic, we’re over the moon to see Ronnie standing. Stood there next to his twin brother Robert and Emily was such a lovely thing.

‘He is weight-bearing on his feet so he will need to build his muscles up, but has support for his back, but he is standing.

‘It’s a first step, but it is vital in his recovery process.’

Ronnie was found ‘unresponsive’ and ‘floppy’ in his cot in February 2018. Phil had recognised the signs that he had a stroke from a TV advert.

At Hull Royal Infirmary, doctors decided to transfer Ronnie to Leeds General Infirmary, where the family were told he had a genetic disorder.

Ronnie is thought to have inherited neurofibromatosis from his father, who has a milder form of the disease.

He had stents placed in his brain to drain the growth, which halved the size of the tumour and left a huge scar on his head.

But the although the stents were successful, the surgery thinned the arteries that provide blood to Ronnie’s brain, putting from at risk of further strokes. 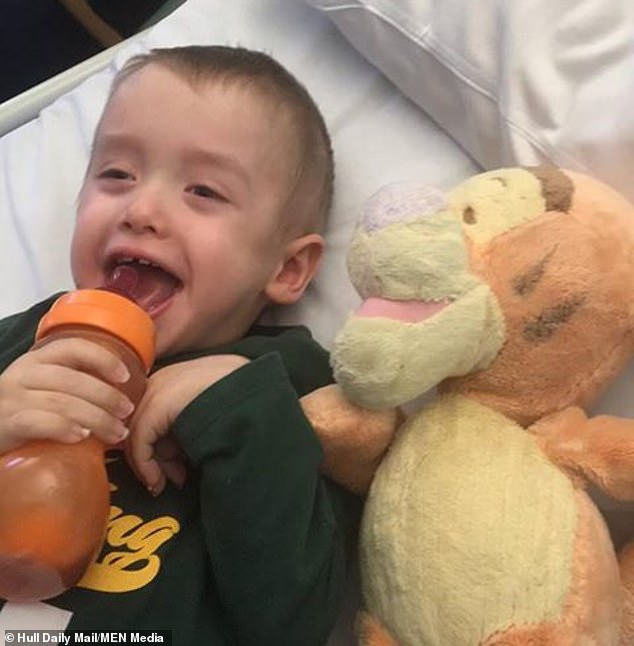 Ronnie had stents placed in his brain to drain the growth, which halved the size of the tumour. But he also needed an 11-hour operation in October and chemotherapy. Pictured in hospital

Neurofibromatosis is the name of a group of conditions that cause lumps to grow on the coverings of nerves.

NF is caused by a mutation in one of the genes. About half of the people who have NF have no family history of the condition.

This is called a spontaneous gene mutation. The other half of people will have inherited NF from their mother or father.

Some sufferers are affected by neurofibromas, which usually appear during adolescence.

These may first appear on the skin as a purplish mark, before a small fibrous lump appears.

They can also grow along deeper-seated nerves inside the body, which can be painful if knocked.

The lumps can increase in number during a person’s lifetime.

NF has also been linked to an increased risk of stroke if growths develop on nerve cells in the brain and cut off the organ’s blood supply.

There is no treatment to stop the lumps from appearing, although surgery or laser treatment can sometimes be used to remove them.

To prevent this, he had an 11-hour surgery in October, mid way through a year-long battle to recover from his stroke.

Ronnie started his chemotherapy treatment in March last year with his family, including parents and five-year-old sister Emily, by his side.

He received a stronger dose of chemotherapy to shrink his brain tumour in January this year following advice from doctors that the family need to prepare themselves for end of life care.

However, the battling toddler has seen his fortunes turn around and his family say he is gaining weight and responding really well to the treatment.

As well as this, Ronnie’s eyesight appears to be regaining his sight, after Mr and Mrs Kerman were devastated to be told by doctors that Ronnie was blind after the stroke.

In March, Mr Kerman said: ‘I found that really heartbreaking. He will potentially never see again.

‘I can deal with the brain tumour and him going through chemo, but the thought of him not having his sight is just heartbreaking.

‘I want to take all the pain away and I would love to give him my sight.

‘Me and my wife have broken down crying a few times and we both just want to cuddle him and do everything a parent should do with their child.’

The Kermans were told Ronnie’s sight could come back but that it was very unlikely. 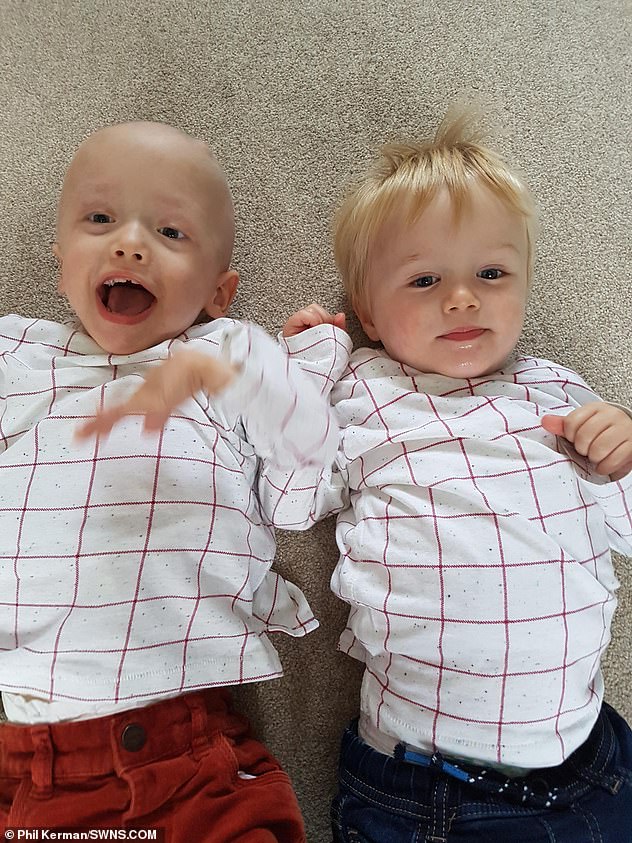 Pictured after the stroke, Ronnie is on the road to recovery with the support of his loving twin brother Robert (right) who helps to look after him every day 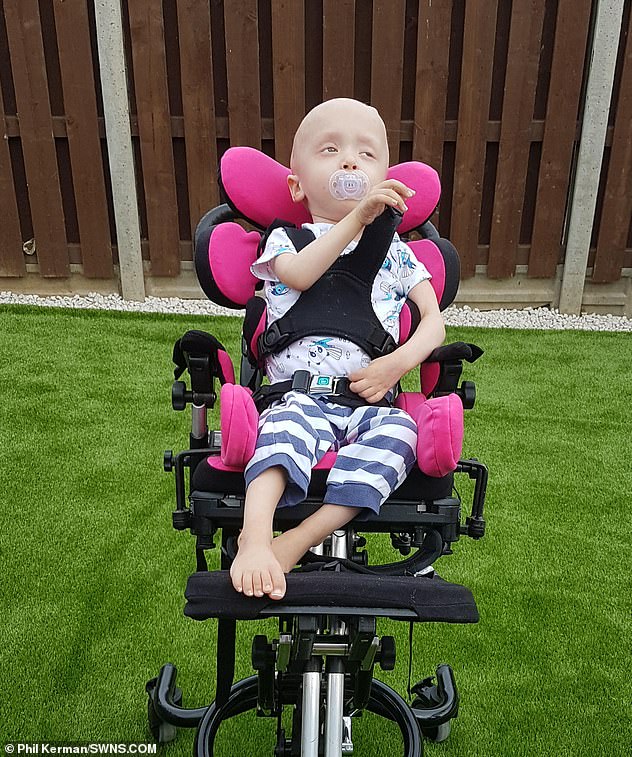 Ronnie, pictured in September, lost most of his vision and is unable to walk or talk after losing the use of his legs. He is cared for by Mr Kerman 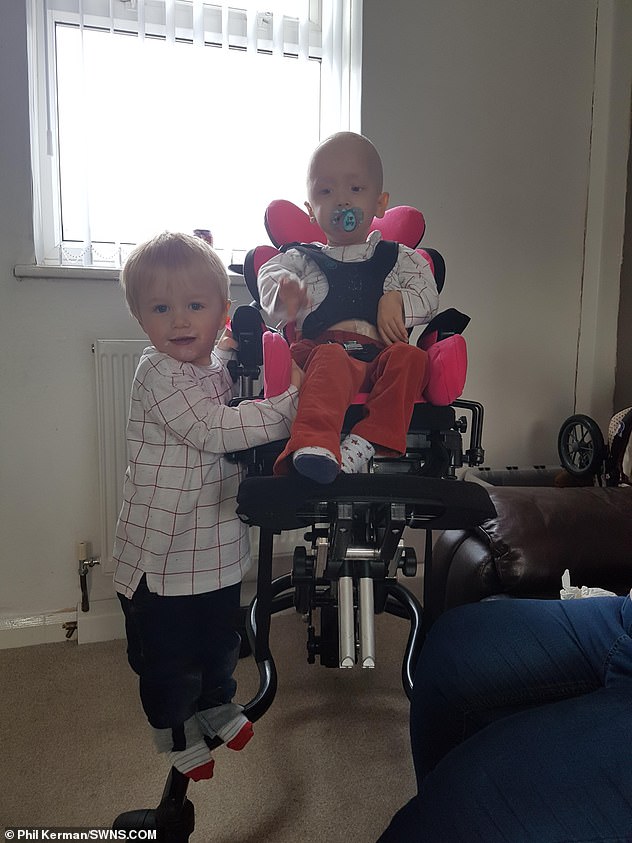 The Kermans were previously told Ronnie’s sight could come back but that it was very unlikely. But now, it appears some of Ronnie has regained some of his sight. Pictured with Robert last year 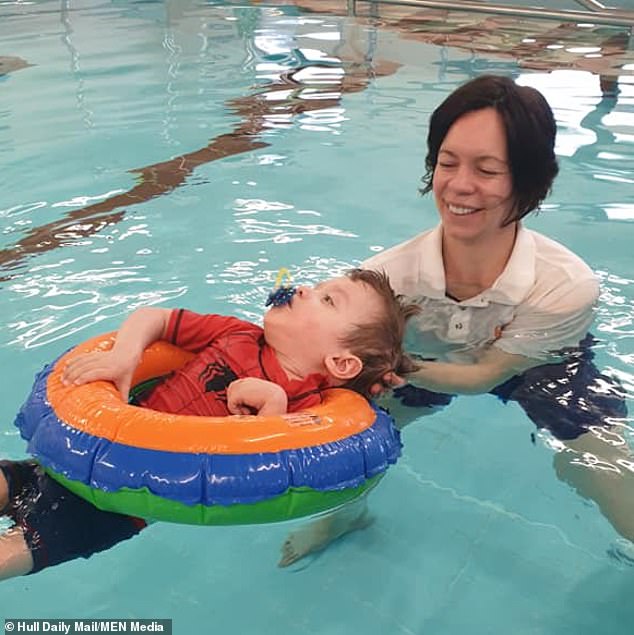 Ronnie is still undergoing chemotherapy, as well as hydrotherapy and physiotherapy sessions

But now, Mrs Kerman said: ‘After seeing the eye specialists today [Monday], and being told that he has some light getting through to his eye that he may regain some eyesight, it is good news.

WHAT IS A STROKE?

Like all organs, the brain needs the oxygen and nutrients provided by blood to function properly.

If the supply of blood is restricted or stopped, brain cells begin to die. This can lead to brain injury, disability and possibly death.

There are two main causes of strokes:

There’s also a related condition known as a transient ischaemic attack (TIA), where the blood supply to the brain is temporarily interrupted.

This causes what’s known as a mini-stroke, often lasting between a few minutes and several hours.

‘However, at this stage, until Ronnie can talk, we just cannot tell.’

Ronnie is cared for by Mr Kerman, who quit his job as a school caretaker to look after Ronnie full time.

Robert helps care for his brother as much as he can, handing him his dummy and passing over glasses of juice.

It was planned that Ronnie would start at Frederick Holmes School for children with severe disabilities. But unfortunately due to the amount of hospital appointments, he will not be able to start for a few more weeks.

He is still undergoing chemotherapy, as well as hydrotherapy and physiotherapy sessions at Leeds LGI and Hull Royal Infirmary, respectively.

The family will find out in two weeks if Ronnie is cancer free.

Mr Kerman said: ‘We are very hopeful. Things are looking really good, we are all hoping and praying that it is good news.

‘Ronnie is the bravest fighter I think I have ever come across. His speech is coming along really well and we hope that he will beat this.’