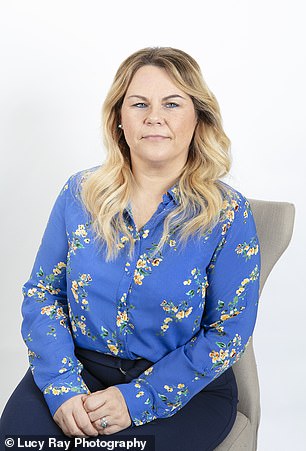 After months suffering period pains so crippling they took her breath away, Julie Smith just wanted to know why.

‘It was excruciating,’ recalls the 42-year-old mother-of-one from Mansfield, Nottinghamshire. ‘And some months it would last several days.’

Her GP told her to take painkillers but when, over the following months, she also started to bleed between cycles, she was referred to a gynaecologist.

She was reassured that getting to the root of the problem would involve just a routine diagnostic procedure — a hysteroscopy — which was no worse than a smear test, painless and risk-free.

The procedure involves using a narrow probe with a telescope at the end to investigate the inside of the womb — Julie was told it would take minutes during an outpatient appointment.

A few weeks later, in January 2018, Julie, an operations manager for a charity, duly returned to her local hospital in Sutton-in-Ashfield.

But far from pain-free, the hysteroscopy was, Julie says, one of the most agonising experiences of her life — worse than childbirth — leaving her physically and emotionally traumatised.

Good Health, which first raised concerns about hysteroscopies in 2014, has discovered that tens of thousands more women could have suffered similarly.

Shockingly, many may be being denied appropriate pain relief during the procedure because it’s in NHS trusts’ financial interests to do so.

‘I’d been told by the consultant that it might be a little uncomfortable,’ says Julie, who is married to Darren, 40, an HGV driver. ‘But the moment the probe was inserted, I experienced the most horrific pain that shot straight through my abdomen.

‘The consultant asked if I wanted him to stop but I was desperate to find out what was causing my abnormal bleeding so I said no.

‘He then injected a local anaesthetic but it had no effect and after five minutes more it was so unbearable I shouted “Stop, stop — I need you to stop”.

‘He stopped and afterwards apologised and admitted some women do find it extremely painful. I was given a cup of tea and taken to a recovery area, where I sat shaking and crying.’ 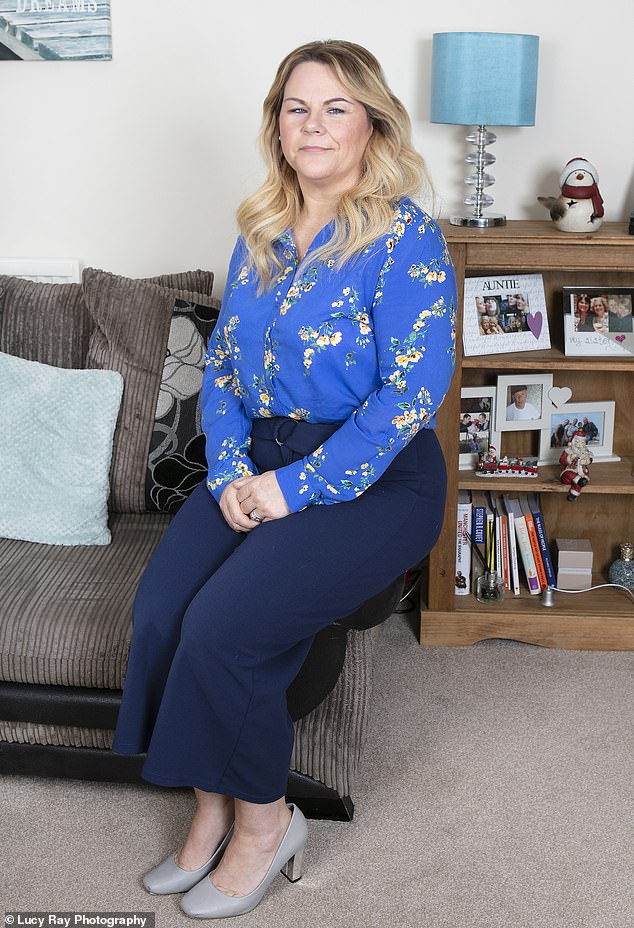 Fact: Up to 10,000 women a year in England alone undergo a hysteroscopy to investigate abnormal bleeding, which can be a sign of cancer

Online forums are inundated with similar complaints. Some women say their hysteroscopy was worse than childbirth, broken bones or even a burst appendix — one of the most painful medical emergencies anyone can experience.

And an online petition calling for radical changes in the way doctors manage pain during the procedure has been signed by more than 48,000 people in the UK since it was launched last summer.

Up to 10,000 women a year in England alone undergo a hysteroscopy to investigate abnormal bleeding, which can be a sign of cancer. The procedure is also used to check for fibroids or polyps in the womb, after repeated miscarriages or because a woman has difficulties conceiving.

Doctors use a device called a speculum (as in a smear test), then insert the hysteroscope via this into the cervix and the womb. Gas or fluid may also be pumped in to inflate the womb to give the surgeon a better view.

Most women are treated as outpatients, meaning they spend no more than 30 minutes or so in hospital. But it’s clear there is a vast gulf between what doctors say women may experience and what they actually do.

Many are told prior to their appointments that hysteroscopies rarely cause discomfort but, if they’re worried, they should take a couple of paracetamol or ibuprofen an hour or so before their appointment.

The Royal College of Obstetricians and Gynaecologists (RCOG) says 90 per cent of women experience little or no pain and that those who do tend to be in high-risk groups — those without children and post-menopausal women with abnormal bleeding.

These groups tend to have tighter cervixes and the RCOG says they are much more likely to need an injection of local anaesthetic.

Importantly, if they still find the pain unbearable, the procedure should be stopped and rescheduled to be done under a general anaesthetic.

But campaign group Hysteroscopy Action claims many women are never told that general anaesthetic is even an option; instead they’re forced to endure the trauma once it’s started because they have no idea the procedure can be stopped and repeated when they have been put to sleep. And it warns the numbers suffering are much higher —affecting not just ‘at-risk’ groups — than official figures suggest. 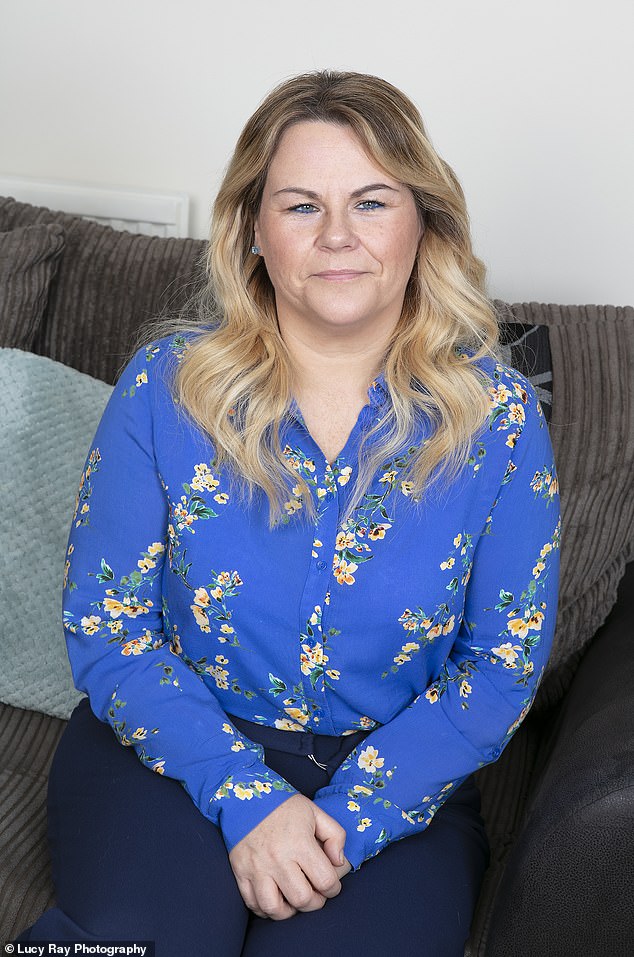 ‘He stopped and afterwards apologised and admitted some women do find it extremely painful. I was given a cup of tea and taken to a recovery area, where I sat shaking and crying.’

A Freedom of Information request it submitted to NHS trusts in England, revealed the proportion of patients who reported severe pain during a hysteroscopy is much nearer one in four than the one in ten the RCOG suggests.

Julie eventually had the hysteroscopy under a general anaesthetic, but her experience left her feeling so vulnerable that she says she ‘completely broke down’ at a more recent smear test.

‘I’m angry and hurt that the hysteroscopy experience was so brutal,’ says Julie, who 18 months later is still undergoing tests to find the cause of her bleeding.

Elaine Falkner, 70, from Little Sandhurst in Berkshire, remembers nearly having to be ‘scraped off the ceiling’ during a hysteroscopy for post-menopausal bleeding five years ago.

‘Two nurses either side of me started chatting like I was at the hairdressers, telling me to relax,’ she recalls.

‘But when the doctor tried to get the scope through the cervix, the pain was off the scale and I thought I was going to pass out.

‘The nurses kept saying “Are you still with us”?’

Elaine says the doctor then injected local anaesthetic but it made no difference, In fact the pain worsened as the doctor pumped in water to get a better view of the cause of the bleeding.

‘It took 30 minutes and by the end I felt violated; it was utterly barbaric.’ She says she has a high pain threshold — ‘I delivered two children with nothing but gas and air — but after this I crawled under a blanket and cried for the rest of the day.

‘Someone should have explained it could be very painful and sometimes must be stopped — and that post-menopausal women like me were at greater risk of pain.’

Katharine Tylko of Hysteroscopy Action says women should be offered a full choice of pain relief in advance of the procedure.

‘At the moment, many just get their hand held and if they complain they’re told they’re very unusual — just like with the vaginal mesh.’

So why is this happening? Firstly, general anaesthetic carries a degree of risk and is usually reserved for cases where the surgeon expects to do extensive treatment at the same time.

But another factor is that cash-strapped hospitals are encouraged to do more procedures such as hysteroscopies in an outpatient setting to save money.

Earlier this year analysis by Surrey and Sussex Healthcare Trust showed an outpatient hysteroscopy costs around £197; the cost for a day case involving a general anaesthetic soars to £995.

The trust concluded it could save almost £70,000 a year if consultants did more outpatient procedures.

The government has also pledged to reward hospitals that boost the proportion of outpatient hysteroscopies to at least 70 per cent; the current figure is 59 per cent.

Hysteroscopy Action wants an end to these cash incentives and for women to be ‘honestly warned’ about the risk of pain.

It also wants doctors to routinely take pain scores from the women every few minutes during the procedure so there’s a clearer indication of when to intervene.

Lyn Brown, Labour MP for West Ham in London, recently highlighted the issue in a debate in Parliament — after going through a hysteroscopy herself in 2017.

‘The Department for Health is not working to reduce pain and trauma for women: it is incentivising hysteroscopies without effective pain relief,’ she says.

When she requested a general anaesthetic because she’s in the high-risk pain group having had no children, her consultant tried to talk her out of it.

‘She argued it would only delay any diagnosis and treatment,’ Lyn told Good Health. ‘She was very persistent and tried every piece of emotional blackmail she could, including taking up resources.

‘I stood my ground and she eventually agreed but if we do not get rid of the perverse financial incentives, even women as strong as me will be browbeaten.’

The British Society for Gynaecological Endoscopy (BSGE), which represents consultants performing hysteroscopies, recently issued a statement stressing that women should be offered ‘from the outset, the choice of having the procedure performed under general or regional anaesthetic’.

It added that ‘it is important the procedure is stopped if a woman finds the outpatient experience too painful’.

Five years after her hysteroscopy, Elaine Falkner is emphatic: ‘It’s unbelievable that this is still happening in this day and age.’