Bacteria can become antibiotic-resistant by closing pores on their surface to stop drugs getting in, study finds

Scientists have discovered how bacteria become resistant to antibiotics and say they may be able to work out how to get past their defences.

Antibiotic-resistant bacteria, known as superbugs, are a deadly and growing concern as increasing numbers of people are contracting hard-to-treat illnesses.

Resistance has been listed as one of the World Health Organization’s biggest threats to human health and already kills tens of thousands of people per year.

Research has revealed how bacteria close tiny pores through which antibiotics enter, stopping the drugs from getting in and destroying them.

And the scientists said understanding this process could help them design medicines which are able to ‘pick the lock’ and get past defences. 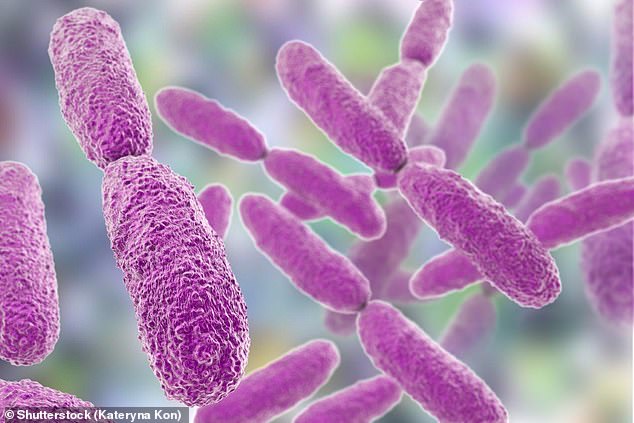 A type of bacteria called Klebsiella pneumoniae (pictured, an illustration of the bacteria) are increasingly becoming resistant to antibiotics used widely in hospitals

These bacteria cause infections in the lungs, wounds and blood of hospital patients and particularly those with weakened immune systems.

More than 20,000 K. pneumoniae infections were recorded in UK hospitals in the past year.

And the bacteria are becoming increasingly resistant to antibiotics – particularly a class of drugs called carbapenems, which are used as a backup when others fail.

Scientists say rising resistance to carbapenems could dramatically affect the ability to cure infections which were once simple to treat.

Author of the study, Dr Joshua Wong, said: ‘The prevalence of antibiotic resistance is increasing, so we are becoming more and more reliant on drugs like carbapenems that work against a wide range of bacteria.

WHAT IS ANTIBIOTIC RESISTANCE?

Antibiotics have been doled out unnecessarily by GPs and hospital staff for decades, fueling once harmless bacteria to become superbugs.

The World Health Organization (WHO) has previously warned if nothing is done the world is heading for a ‘post-antibiotic’ era.

It claimed common infections, such as chlamydia, will become killers without immediate solutions to the growing crisis.

Bacteria can become drug resistant when people take incorrect doses of antibiotics or if they are given out unnecessarily.

Chief medical officer Dame Sally Davies claimed in 2016 that the threat of antibiotic resistance is as severe as terrorism.

Figures estimate that superbugs will kill 10 million people each year by 2050, with patients succumbing to once harmless bugs.

Around 700,000 people already die yearly due to drug-resistant infections including tuberculosis (TB), HIV and malaria across the world.

Concerns have repeatedly been raised that medicine will be taken back to the ‘dark ages’ if antibiotics are rendered ineffective in the coming years.

In addition to existing drugs becoming less effective, there have only been one or two new antibiotics developed in the last 30 years.

In September, the WHO warned antibiotics are ‘running out’ as a report found a ‘serious lack’ of new drugs in the development pipeline.

Without antibiotics, C-sections, cancer treatments and hip replacements will become incredibly ‘risky’, it was said at the time.

‘But now with important bacteria like K. pneumoniae gaining resistance to carbapenems it’s important we understand how they are able to achieve this.

‘Our new study provides vital insights that could allow new strategies and drugs to be designed.’

In Dr Wong’s paper he revealed how the team looked at the structure of pores in the surface of the K. pneumoniae bacteria.

These pores are the holes through which antibiotics enter the drug and are able to destroy them from the inside.

When bacteria become resistant, the team found, they close these pores as though closing a door to the insides of themselves.

Although this makes it harder for them to absorb nutrients, and may therefore slow down how quickly they can grow, it also makes them much harder to kill.

However, the team said the advantage of avoiding antibiotics outweighed the negative impact of slower growth for the bacteria, allowing them to maintain a high level of infection.

Being able to understand the mechanics of this process could help scientists to develop drugs which bypass the bacteria’s ‘locked doors’.

Study team leader Professor Gad Frankel said: ‘The modification the bacteria use to avoid antibiotics is difficult to get around.

‘Any drugs to counteract this defence mechanism would likely also get blocked out by the closed doors.

‘However, we hope that it will be possible to design drugs that can pick the lock of the door, and our data provides information to help scientists and pharmaceutical companies make these new agents a reality.’

Scientists say their results suggest the pressure posed by extensive use of carbapenems in hospital settings is a major driver in the spread of these superbugs.

They suggest there should be rules in place to restrict how often the broad-spectrum drugs can be prescribed in hospitals.

The research was published in the journal Nature Communications.