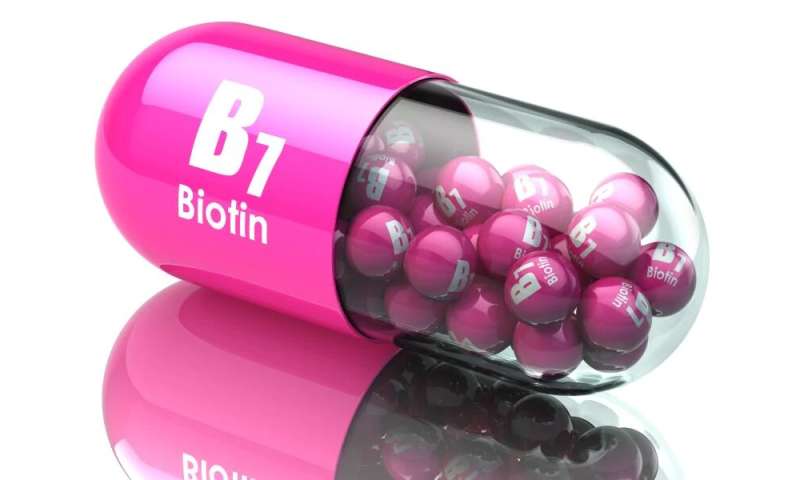 (HealthDay)—A growing number of older people are turning to the vitamin biotin to fortify their aging skin, hair and nails.

But a new study shows how large doses of it can interfere with some vital medical tests.

Biotin, or vitamin B7, is an essential nutrient. And there is no issue with the lower doses found in multivitamins, said study author Danni Li, an associate professor of laboratory medicine and pathology at the University of Minnesota.

But high doses of biotin can cause falsely low results in a blood test that measures the protein troponin—which is used to help diagnose heart attacks. In 2017, the U.S. Food and Drug Administration issued a safety alert on the issue.

It hasn’t been clear, though, how popular high-dose biotin use is. So Li and her colleagues looked into the question, using data from a long-running U.S. health survey.

The researchers found that high-dose biotin supplements have risen from obscurity to become notably more popular in recent years.

High-dose biotin was defined as 1 milligram (mg) per day or more, which is many times greater than the recommended dietary intake of 30 micrograms a day.

Overall, Li said, women were much more likely to use the supplements. Among women aged 60 and older, over 7% took at least 1 mg per day, while another 2% used doses of 5 mg or more.

That’s concerning because older adults are at increased risk of a heart attack, particularly if they have conditions like high blood pressure or diabetes.

“If you’re taking high-dose biotin and you have a heart attack, there’s a good chance you might not be diagnosed correctly,” said Dr. Anne Thorndike, chair of the American Heart Association’s nutrition committee.

For people with risk factors for heart attack, it’s best to avoid large doses of biotin, according to Thorndike. She also said ER doctors should be aware of the potential for biotin interference, and ask patients with possible heart attack symptoms about any supplement use.

The findings are based on responses to the U.S. National Health and Nutrition Examination Survey. It periodically surveys a nationally representative sample of Americans about their health and lifestyle habits.

Biotin deficiency can cause brittle nails, hair loss and skin rash. But the condition is also rare, according to the U.S. National Institutes of Health (NIH), and there is little evidence biotin supplements promote healthier skin, hair and nails.

Thorndike said a balanced diet is always a better source of nutrients than pills are.

“People often spend a lot of money on supplements,” she said. “I’d rather see them spend that money on nutritious foods. There’s plenty of evidence supporting the benefits of a healthy diet.”

Food is more complex than a pill, providing the body with combinations of not only vitamins and minerals, but protein, fiber, fats and plant compounds, Thorndike noted.

Food sources of biotin include liver, eggs, pork, sweet potatoes, sunflower seeds and almonds, according to the NIH.