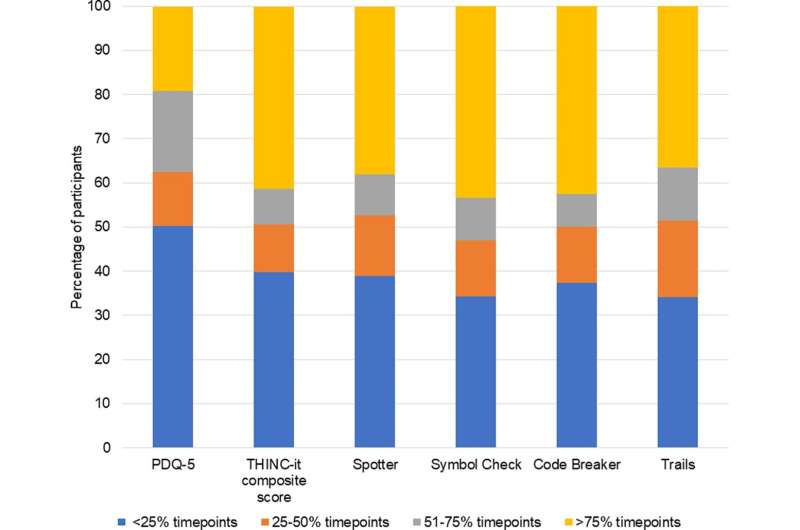 New research with over 500 participants diagnosed with depression has shown that smartphone assessments of their thinking difficulties is linked to the severity of their symptoms and the impact of the condition on daily life.

Led by researchers from the Institute of Psychiatry, Psychology & Neuroscience (IoPPN) at King’s College London and the University of Sussex, the study showed that continuing problems in concentration, attention and memory have a clear relationship with severity of depression and the impact on people’s functioning in everyday life. Thinking difficulties were assessed through a smartphone app both from self-report and objective measures using tests.

The study was published in Psychological Medicine and data were collected from participants in three countries as part of the RADAR-CNS program which investigated the use of wearables and smartphones to monitor three health conditions. Results indicate the potential for the use of smartphones to provide both self-report and objective assessments of thinking difficulties at regular times and the value that this could have in monitoring and managing depression.

“Many patients with depression report difficulties in thinking and this affects important aspects of their life such as finding a job and socializing. Although thinking problems have been recognized as being an important part of depression, they are rarely monitored because it is challenging for both clinicians and patients. Remote monitoring through smartphones and wearables could offer an acceptable and impactful solution,” said Dr. Sara Simblett, joint-first author on the study.

People with major depressive disorder often have difficulties in thinking which may contribute to low mood and to social problems such as poor quality-of-life and an inability to work. However, despite being integral to the condition, thinking problems are assessed by less than 40% of psychiatrists to monitor patients.

Identifying and assessing cognitive impairments is challenging. Self-report measures may be biased whilst more objective measures are usually conducted in a laboratory which is time-consuming, demanding for patients and may not truly represent how we think in the real world. Remote monitoring by smartphones could offer a promising avenue to assess thinking at regular interviews, in real-life environments and without requiring patients to travel.

The study analyzed data provided by 508 participants from the UK, Spain and the Netherlands who had completed app-based assessments of thinking, alongside measures of depression, self-esteem and difficulties with tasks needed for everyday living (functional disability). The assessments were requested every three months and followed up for a maximum of two years. Over three-quarters (76.2%) of the participants were female and the average age was 46.6 years.

Researchers also analyzed different aspects of thinking and found that those with difficulties in decision-making had more problems with everyday tasks and those with poor processing speed tended to have worse symptoms of depression.

“Our study confirms that an important relationship exists between difficulties in memory, decision-making and concentration and the severity of depression. By using a smartphone app to assess this relationship we have also shown the potential insight that this type of remote monitoring could provide to help patients and clinicians manage symptoms of depression and their impact on their life,” said Dr. Faith Matcham, joint-first author on the study.