‘Anti-vaxxers have an utter contempt for science’: Expert puts those who oppose life-saving jabs in the same bracket as flat-Earthers and climate-change deniers

Anti-vaxxers have an ‘utter contempt for science’ and should be considered on par with flat-Earthers and climate change deniers, an expert has claimed.

Dr Jonathan Kennedy, a lecturer in global health care at Queen Mary University of London, said the anti-vaxx movement is being fuelled by distrust of experts.

The same doubt in public health bodies has fed the flat-Earth and climate change denial movements, he argued.

Dr Kennedy told MailOnline: ‘These are small groups of people who have an utter contempt for science.’ 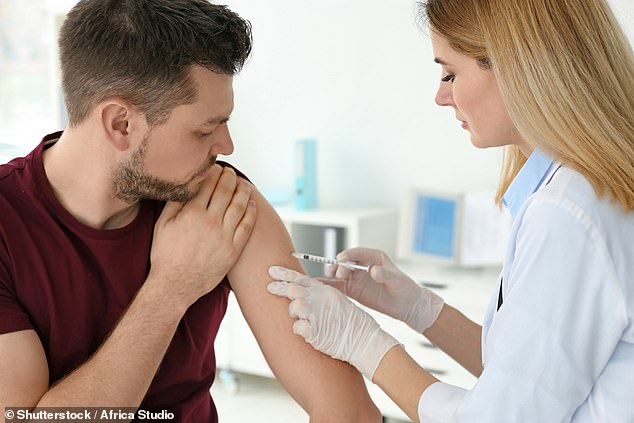 His comments come amid a worldwide measles outbreak, as cases this year are already 300 per cent higher than in 2018.

Dr Kennedy argued Britain has the capacity ‘to eradicate the virus’ completely, if parents only allowed their children to be vaccinated.

‘When we get to vaccines, we’re suspicious around experts in this field – doctors advocating vaccines, big-pharma companies and public health bodies.

‘People have had enough of “experts” – look at the flat Earth movement and climate-change deniers.’

Vaccination rates for the measles, mumps and rubella (MMR) jab dropped in 2018 for the fourth consecutive year in the UK.

While the number of children getting immunised declined, measles cases more than trebled last year in England alone.

Official figures show just 91.2 per cent of children in the UK received their first MMR jab by the age of one last year.

The NHS offers the jab to babies as part of their routine vaccination schedule, usually within a month of their first birthday.

She said in November: ‘Over 30 years, we have vaccinated millions of children. It is a safe vaccination, we know that, and we’ve saved millions of lives across the world.

‘People who spread these myths, when children die they will not be there to pick up the pieces or the blame.’

One myth is based on research done by Andrew Wakefield in the 1990s which claimed MMR led to autism, but his results were later found to be fake, and the work was called ‘fatally flawed’, ‘fraudulent’ and ‘dishonest’ by experts in the field.

Others claim the vaccine doesn’t work – but after the introduction of MMR in 1963, global measles deaths dropped, on average, from 2.6million to around 100,000, according to the WHO.

The figure has fluctuated since, believed to be partly due to the Wakefield scare in the mid-90s, but in 2017 there were reports of only 1,693 measles cases in England.

Youngsters then have a second injection before they start school, typically at three years and four months.

The World Health Organization (WHO) claims 95 per cent of people need to have the MMR jab for ‘herd immunity’.

This occurs when a population is protected against a disease due to a sufficient number of people being vaccinated to prevent it spreading.

Herd immunity protects those who may be unfit to get vaccinated, such as newborns and those undergoing chemotherapy.

Global measles cases are set to be more than 300 per cent higher this year than in 2018, with 112,000 cases were reported between January and March.

In the same period last year, just 28,124 cases were recorded by the WHO.

‘It would be very straightforward to eradicate measles from the UK. But parents are refusing to vaccinate their children.’

His comments came about after the UK’s Health Secretary Matt Hancock refused to rule out children being kept out of schools if they are not vaccinated against measles.

As of last year, toddlers in France who have not had the necessary jabs, which includes the MMR, are not allowed to attend state schools or nurseries.

There are similar laws in many US states, with 50 of them requiring children have the MMR before they go to kindergarten.

However, vaccination is the choice of the parents in the UK.

Anti-vaxx sentiment has been blamed on false information spread by now-disgraced scientists, including Andrew Wakefield, who alleged the MMR jab causes autism.

The MMR vaccine has been proven to be effective and safe, and has saved thousands of lives since it was introduced in the UK in 1988, according to the NHS.

Measles is a highly contagious viral infection that spreads easily from an infected person by coughing, sneezing or even just breathing.