A group of polar explorers who spent 14 months in Antarctica came back with shrunken brains, a study has revealed.

The eight scientists and a cook had been staying on a research station close to the coast of the icy continent, to the south of the Atlantic Ocean.

But spending so much time looking at a blank landscape, cooped up in the same small building with the same people for more than a year took its toll on their minds.

MRI scans before and after the expedition revealed areas of their brains responsible for learning, emotions and memory had shrunk during the trip.

People who stayed at home, meanwhile, did not suffer the same shrinkage over the same time period and even saw some growth. 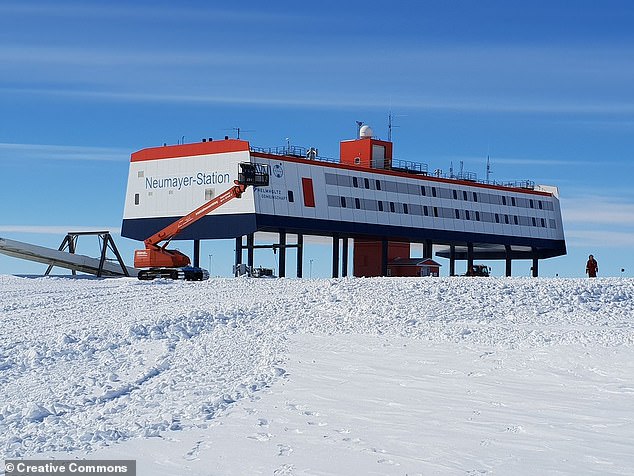 The study, conducted by various universities in Germany and the University of Pennsylvania, showed the brain has a ‘use it or lose it’ nature.

Because the scientists weren’t stimulating their brains enough while on the expedition, bits of them started to get weaker and shrink, like an unused muscle.

‘It’s very exciting to see the white desert at the beginning,’ Dr Alexander Stahn, who carried out the study, told Science News. ‘But then it’s always the same.’

One region of their brains – the dentate gyrus, which works to process and store information from the senses – shrunk by almost 10 per cent on average.

While other areas of the organ – it was mostly the learning centre, the hippocampus, which was affected – shrunk by around five per cent or less.

People who spend long periods of time alone can lose the ability to sleep properly, hallucinate, become stressed or depressed or less able to process information.

Humans are, in their basic nature, social creatures, says psychology lecturer Sarita Robinson, from the University of Central Lancashire.

‘One of the reasons that living in isolation is difficult is because humans are social creatures,’ Miss Robinson wrote in The Conversation.

‘Many people that have lived in isolated environments – such as researchers stationed in Antarctica – report that loneliness can be the most difficult part of the job.’

She added: ‘Loneliness can be damaging to both our mental and physical health. Socially isolated people are less able to deal with stressful situations.

‘They’re also more likely to feel depressed and may have problems processing information. This in turn can lead to difficulties with decision-making and memory storage and recall.

‘People who are lonely are also more susceptible to illness. Researchers found that a lonely person’s immune system responds differently to fighting viruses, making them more likely to develop an illness.’

This may have reduced the expeditioners’ emotional intelligence and made them worse at interacting with other people, Dr Stahn, who works at the Charité–Universitätsmedizin Berlin, told Live Science.

The team were staying on the Neumayer Station III, a research station on the Ekström Ice Shelf.

Isolated and surrounded by hundreds of miles of barren snowscape, the building is on stilts and only hosts around nine people at a time.

And Antarctica is one of the most extreme environments in the world – it has a six-month summer from October to February, during which the sun almost never sets.

This is followed by six months of winter when there is almost no daylight at all. There is rarely rain or snow in Antarctica and mosses are the only plant life.

Dr Stahn and his colleagues scanned the brains of the researchers before and after their expedition and compared them to scans of normal people living in Germany.

They also tested levels of a chemical called brain-derived neurotrophic factor (BDNF) which is found in larger amounts when new nerve cells are being created.

The expeditioners had around 45 per cent less BDNF than the at-home group, and it stayed lower than normal for around six weeks after they returned to society.

And the people whose hippocampuses showed the worst shrinking also performed worse on tests of brainpower than they had before they left.

Studies in rodents have found that a lack of stimulation and physical interaction shrinks the brains of animals, but how isolation affects humans is less well understood.

Dr Stahn suggested virtual reality and exercise programs could be used to try and reduce the effects.

The research was published in the New England Journal of Medicine.