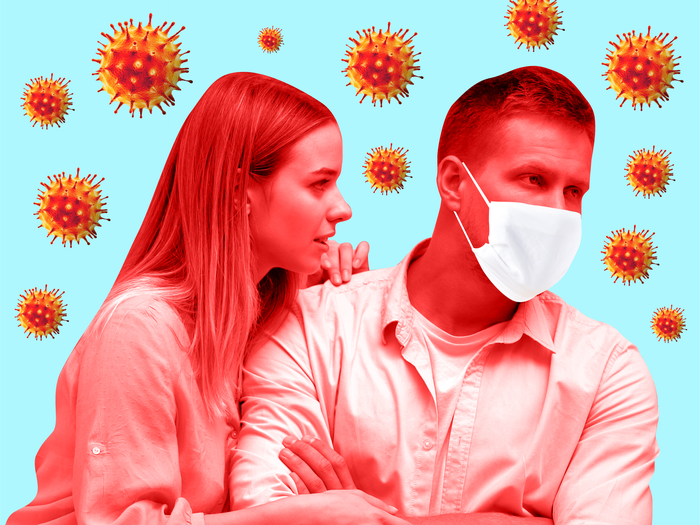 When Rachel, a Brooklyn school teacher and mother of eight, learned she was in a carpool with a family of anti-maskers, she was furious.

In early September, Rachel told the family's daughter it was a requirement to wear a mask in her car, since she had asthma and was a cancer survivor, which put her at higher risk for a severe case of COVID-19. The school had also sent a written policy that said carpool participants must wear masks, Rachel told Insider.

"It was completely inconsiderate. I guess people just don't feel it really matters. They don't care. I'm not sure what's going through people's minds," Rachel, who asked to use a pseudonym to protect her and her children's identities from her close-knit religious community, told Insider.

In a pandemic, respect for other people's safety precautions is more obviously important than ever — there is still no effective treatment for COVID-19, which can be deadly, and while vaccines are starting to roll out, they won't reach most of us for months. Yet stories abound of people feeling violated, with friends or family or dates leaping in for a hug, without getting their consent first.

As we have learned from the #MeToo movement and rising rates of sexually transmitted diseases in the US, we all too often prioritize comfortability and individualism over safety and empathy. Stories of people knowingly giving their sexual partners STDs and removing condoms during sex without warning show that, when it comes to intimate boundaries with those closest to us, uncomfortable conversations are the exception, not the rule.

With a COVID-19 vaccine on its way, there's an end in sight for the pandemic. But experts have stressed we will still need to be wearing masks and social-distancing for most of the year, meaning these uncomfortable encounters and safety-related differences aren't going away any time soon.

Now is the time for Americans to practice the art of learning and respecting other people's boundaries. This pandemic won't last forever, but the value of empathy will.

Consent has been thoroughly discussed in certain groups, but most people are never taught about the concept

In the US, the concept of consent has become more mainstream over the past decade, with the #MeToo movement acting as a cultural tipping point for sexual-consent conversations, Laura McGuire, a sexuality researcher and consent educator, told Insider.

Sexual kinksters were the first group to adopt sex-specific consent practices starting in the 1970s, McGuire said, since their circles often experimented with potentially physically or emotionally dangerous fantasies, like whipping, trash-talking, and hypnotism.

Kinksters knew there was a moral way to engage in these acts that appeared violent and immoral to outsiders, but meant something else to those who entered the agreement. They found that consistently discussing their sexual interests with potential partners in honest and open ways led to greater safety, contentment, and pleasure for everyone involved, than did assuming someone's sexual boundaries.

Around 2010, feminist thinkers started having similar conversations related to Title IX, a 1972 law designed to end gender and sexual discrimination in educational settings like universities. Title IX includes a clause defining sexual consent. It suggests that doing anything of a sexual nature without the other's person's consent, in both situations where they don't explicitly give consent or are incapable of giving it, is considered sexual violence and violates the bill.

Kinksters, and the feminists who became inspired by their consent work, discuss consent as a regular practice in their lives. Meanwhile, the bulk of Americans fail to grasp the importance of ongoing and open conversations about what it means to agree to something. Above all, consent conversations are left out of basic sex education, the perfect forum for such talks, because many states have abstinence-only curricula.

Sex educators have noticed how useful their teachings, which center around consent, can be when discussing mask-wearing, social distancing, and other safety measures with loved ones who could have differing views. They've also noticed how difficult it is for folks to have these all-important conversations, similar to the struggles of discussing sex with a potential partner.

Sex isn't the only framework where we need to get consent.

During the pandemic, studies on people's adherence to coronavirus safety measures have painted a picture of how different one person's idea of "safe" is from another's, highlighting the importance of consent-focused chats in our pandemic-ridden world. Without them, miscommunications are bound to occur.

That's what happened to Stephanie Frank, a social media strategist living in Nassau County, New York. When Frank got off the phone with her friends after agreeing on safety measures, she felt prepared, excited even, to meet them in person.

It was the summer, and after Frank spent her entire spring away from friends, she figured her group's agreed-upon plan, which involved everyone wearing masks, was in her comfort zone.

But when she arrived at a friend's backyard, another friend approached Frank maskless and planted a kiss on her cheek. Frank bristled, but said nothing about the greeting.

"I felt like I had to ignore it. I didn't want to hurt my friend's feelings," Frank told Insider of her initial reaction. After reflecting on the situation, Frank felt differently.

"I got in my car later and I thought, 'I should've just said something because whether or not this person feels bad, it's my health on the line,'" she said.

Frank's worry of upsetting her loved ones over her safety needs weren't unfounded. A few months later, she and her husband told her father-in-law they no longer felt comfortable seeing him or his wife because he returned to working in an office. He became offended, taking their statement as a personal attack, though Frank didn't have that intention.

America's individualistic culture is historically at odds with consent

American culture has taught us that personal boundaries are a sign of weakness.

Look no further than "F— your feelings," a motto Trump supporters incite when a person critiques their long-held freedoms.

Though not everyone stands behind the phrase, it's still an ingrained part of society. Even people who care about others' feelings on the surface aren't immune to misunderstanding consent, as a January 2018 Babe.net essay from a woman who went on a date with comedian Aziz Ansari explained. Though she never said "no," to his sexual advances, she also didn't enthusiastically agree to them and ended up having "the worst night" of her life, she wrote.

It's that lack of inherent empathy among so many Americans that has made consent such a difficult concept to instate, even when we need it most.

In South Korea, mask-wearing as a public health measure has been part of the country's culture since at least 2014 when dust-polluted air became a country-wide health threat, and has been considered the country's saving grace in controlling coronavirus spread.

In New Zealand, Italy, and France, people didn't get the opportunity to ignore safety guidelines, as strict stay-at-home orders were enforced early on. In the US, it's been a different story.

"We Americans, we value liberty," Ken Frazier, the CEO of the pharmaceutical giant Merck, said in a July talk with Harvard Business School.

"I've always believed it's because historically we've had these two big, beautiful oceans protecting us from the rest of the world. And so we could say, 'It's all about my liberty.' It's not about security, or group security."

Frazier was speaking about the pandemic, but safety has always taken a backseat to personal power in the US.

Sexual assault cases, where a survivor's consent is fundamentally ignored, are notoriously hard for prosecutors to win. In prisons, women are forcibly sterilized without consent under the guise that the system knows what's best for them.

Now, people are testing positive for COVID-19 and refusing to wear masks and social distance, all while keeping these details to themselves. The result of this non-disclosure can be catastrophic, and it has, with once harmless events like weddings leading to coronavirus outbreaks.

The US has historically failed at consent, and the pandemic only highlights Americans' lacking adeptness when it comes to asserting boundaries and respecting others' limits. But there's still hope for those who want to learn about and uphold consent, and it all starts with self-education.

Even if American culture fostered consent culture, teaching it in schools, promoting uncomfortable conversations, and holding those who violate it accountable, ignorance towards it will never completely vanish, McGuire said.

"Some people, in any society, will have a proclivity towards more individualistic frameworks within themselves. No matter where they grew up, they're still going to be like, 'Yeah, but what about me? What about what I want?' And we see that in the United States right now," McGuire said.

Empathy, for example, is related to a personality trait researchers call "agreeableness," which refers to how considerate and kind a person is towards others, Monash University behavior and personality researcher Conor Wynn told Insider.

Recent research has suggested people are born with differing degrees of this trait, as well as traits like openness, conscientiousness, extroversion, and neuroticism, which makes them all the harder to tweak throughout life, though it is possible. That's why focusing on the self, the one person you can change, is how you can start.

Taking personal responsibility to understand and uphold consent could change the trajectory of American life during the pandemic, and well into the future.

Countries that teach about sexual health and safety from a young age, rather than preaching abstinence and using fear-based tactics like in the US, have been shown to have lower rates of teenage pregnancy and STDs, according to a 2011 research study from the Guttmacher Institute. Currently, the US has the highest STD rates in the industrialized world.

In Sweden, where legislators changed the definition of rape to now mean any sex without consent in 2018, convictions of rape increased 75% and have brought a greater sense of justice and closure to victims, Reuters reported. In the US, 0.5% of sexual assault perpetrators are convicted, according to data from RAINN.

Though no place is a paragon of consent, the US has failed to catch up to other countries when it comes to empathy. It's a reckoning the coronavirus pandemic has made abundantly clear.