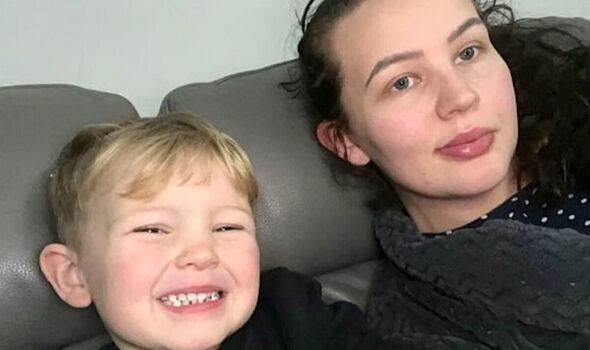 Recalling the “really scary” incident, which occurred on November 20, 2022, Casey said: “When the first stroke hit, Jack [Berry, her partner] had [already] gone to bed… I had tried to go up the stairs, but my right side was paralysed.” Trying to call out for Jack, “no voice” came out. “I had not actually said anything,” Casey recalled.

The mum-of-two “crawled back with one arm to the couch”, which is where Jack found her the next morning.

“I just didn’t know what was going on,” said Jack, 25. “She was just lying still, not moving, not talking on the sofa.”

Spending three days in the Royal Preston Hospital, Lancashire, Casey, 22, was in a “zombie state”.

Jack said: “I thought she was going to die to be honest; it was really difficult, especially as we had to leave our kids, George and Tom, with our parents.”

Finally released from hospital on December 6, Casey “felt scared”, but she wanted to celebrate Tommy’s first birthday, on December 10, at home.

“Ever since the first stroke I feel different,” said Casey. “I can’t hold Tommy any more and things like that.”

After a few weeks back at home, taking daily medication, Casey suffered from another stroke on Christmas Day.

“I kept feeling like I was falling, but I thought I was just feeling the symptoms of my last stroke,” she said.

“Everyone just thought it was the same symptoms continuing, but it actually wasn’t.”

When her physiotherapist visited on December 27, and Casey shared her most recent experience, she was advised to go back to hospital, where Casey learned she had had a second stroke.

“I never imagined that I could suffer a stroke at such a young age,” Casey admitted.

“My attention is now lost, I can’t even watch TV because my attention is gone. I stare into space a lot. I really miss me, I miss the old me.

Casey added: “I can’t even look after the kids because I just can’t physically. I miss them and being able to look after them so much.

“Obviously we have a really supportive family, but I can’t work, and until I recover Jack has to care for me and the kids, which is difficult for both of us.

“Life has really changed. Even something as simple as going out, we have to put the kids in a pram, but I also need pushing in a wheelchair.

“It’s things like that which make life much more difficult.”

Casey said: “I still don’t know why I had the strokes, doctors can’t explain it really.

“I’m hoping to spread awareness about the possibility that people can suffer these strokes.”

People can donate to Casey and Jack’s GoFundMe page, which aims to raise £2,500.