Around 800,000 people in the UK suffer from inflammatory rheumatic diseases (around 456,000 people in Australia), which can cause fatigue, discomfort and difficulties sleeping. Studies have found that four in five of such patients suffer daily with fatigue, affecting their ability to concentrate, go to work and live independently. 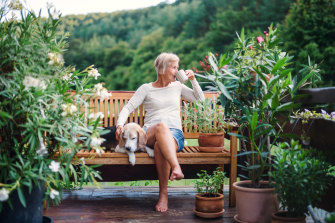 Talk therapy has been shown to be more effective than traditional arthritis treatments.Credit:iStock

Researchers from the universities of Aberdeen and Glasgow compared three different types of care, provided to 368 people with a range of rheumatic diseases, including arthritis.

Participants were split into three groups, and given either exercise sessions, talking therapy – a type of psychological intervention that “targets unhelpful beliefs and behaviours” and aims to replace them with more flexible and positive approaches – or usual care, which meant being given an educational booklet.

The study found that those who were prescribed exercise or cognitive behavioural approaches fared much better than those on standard treatment.

Those in the exercise group had five one-to-one 45-minute sessions over 30 weeks, providing tailored advice, while those who had talking therapy received an average of eight sessions over the phone over the same period.

The study found that talking therapies and giving advice about how to boost exercise levels were effective in reducing levels of fatigue.

The group prescribed exercise saw a slightly greater impact on pain, fatigue and productivity, while those given talking therapy saw the greatest improvements in sleeping patterns.

The benefits continued for six months following completion of the courses of treatment.

And people who were offered talking therapy or exercise interventions also reported improved mental health and quality of life, compared with those who received usual care.

Hundreds of thousands of people with inflammatory rheumatic diseases – which include rheumatoid arthritis, lupus and axial spondyloarthritis – could benefit from the treatments and they should be used as part of routine care, experts have said.

Professor Neil Basu, the lead investigator, who carried out the majority of the research at the University of Aberdeen, but is now at the University of Glasgow, said: “Our study provides new evidence that some non-pharmacological interventions can be successfully and effectively delivered by non-specialist members of the clinical service. It has been encouraging to see that the interventions have led to improvements for participants even six months after the end of the treatment.”

“It’s also great to see that these steps were impactful even when delivered via telephone.”

“Since the onset of the pandemic, health care services are being re-imagined to incorporate greater remote care, however the evidence base to support this shift has generally been limited.”

The research was published in medical journal The Lancet.