To deepen their understanding of the brain, neuroscientists must be able to map in great detail the neural circuits that are responsible for tasks such as processing sensory information or forming new memories. Now, a team of Caltech researchers has described a new approach that may allow for the activity of all of the thousands to millions of neurons within a particular brain circuit to be observed in real time. The novel method, discussed in a “Perspective” article published in the journal Neuron on October 14, has far greater potential than any current approach, the authors say.

The new technique, dubbed “integrated neurophotonics,” uses tiny arrays of optical microchips that can be implanted at any depth inside the brain, in combination with fluorescent molecular reporters and optogenetic actuators, to optically monitor neurons and control their activity, respectively. The arrays emit microscale beams of light to stimulate the genetically modified neurons around them and at the same time record the activity of these cells, revealing their function. Although the work is currently done only in animal models, it could one day help to unravel circuitry deep inside the human brain, says Michael Roukes, principal investigator of the paper and Caltech’s Frank J. Roshek Professor of Physics, Applied Physics, and Bioengineering.

“Dense recording at depth—that is the key,” Roukes says. “We will not be able to record all of the activity of the brain any time soon. But could we focus on some of its important computational structures within specific brain regions? That’s our motivation.”

Neuroscientists in recent years have begun to use optogenetics to study ever-larger groups of neurons in model animals including rodents. In optogenetics, neurons are genetically engineered to express a particular protein marker such as green fluorescent protein (GFP) when excited by a specific wavelength of light. The presence of GFP causes the cell to glow green under fluorescent light, providing a visual indicator of neural activity. By fusing sensor molecules with these markers, researchers can engineer neurons that signal their local activity by modulating this fluorescence. Optogenetics solves some problems inherent in neuroscience studies that rely on implanted electrodes to measure neurons’ electrical activity, which on average can reliably measure only a single neuron because of all the electrical activity in the brain. Because the brain does not use light to communicate, optogenetics makes it easier to track large numbers of these neuronal signals.

But current optogenetic studies of the brain are constrained by a significant physical limitation, says Laurent Moreaux, Caltech senior research scientist and lead author on the paper. Brain tissue scatters light, which means that light shone in from outside the brain can travel only short distances within it. Because of this, only regions less than about two millimeters from the brain’s surface can be examined optically. This is why the best-studied brain circuits are usually simple ones that relay sensory information, such as the sensory cortex in a mouse—they are located near the surface. In short, at present, optogenetics methods cannot readily offer insight into circuits located deeper in the brain, including those involved in higher-order cognitive or learning processes.

Integrated neurophotonics, Roukes and colleagues say, circumvents the problem. In the technique, the microscale elements of a complete imaging system are implanted near complex neural circuits located deep within the brain, in regions such as the hippocampus (which is involved in memory formation), striatum (which controls cognition), and other fundamental structures in unprecedented resolution. Consider the similar technology of functional magnetic resonance imaging (fMRI), the scanning technique currently used to image entire brains. Each voxel, or three-dimension pixel, in an fMRI scan is typically about a cubic millimeter in volume and contains roughly 100,000 neurons. Each voxel, therefore, represents the average activity of all of these 100,000 cells.

“The overarching goal of integrated neurophotonics is to record what each neuron in that collection of 100,000 is doing in real time,” Roukes says. 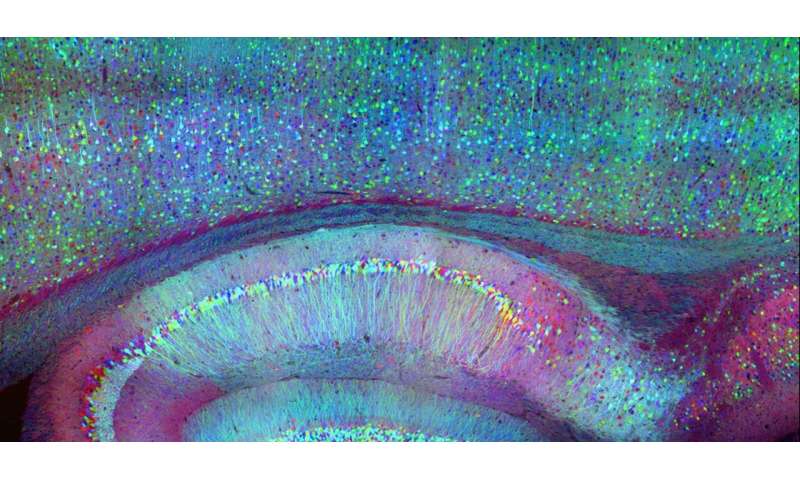 Roukes’s long-term goal is to disseminate the advanced instrumentation of integrated neurophotonics to enable multi-institutional collaborations that will pioneer advanced neuroscience research with this novel technology. Previously, he says, this type of neurotechnology development has relied mostly upon research led by a single lab or investigator. Starting in 2011, Roukes worked with five other scientists and the White House Office of Science and Technology Policy to jump-start what ultimately became the U.S. BRAIN Initiative (Brain Research through Advancing Innovative Neurotechnologies), launched during the Obama administration. Their vision was to bring to neuroscience research the kind of large-scale partnerships seen in the physical sciences, as exemplified by hardware development projects such as international telescope collaborations and the LIGO-Virgo collaboration to find gravitational waves. Now, Roukes says, integrated neurophotonics opens doors for such instrument-building teamwork

“Many of the building blocks [for an approach such as ours] have existed for a decade or more,” he says. “But, until recently, there has just not been the vision, the will, and the funding available to put them all together to realize these powerful new tools for neuroscience.”