Fiona Keele can hardly wait to get the band back together. Now it’s lockdown, she can.

Keele, 48 of Cheltenham, and her husband Richard, 41, decided the way to keep family connected last time was to play online trivia with her in-laws. That worked. So as soon as acting premier James Merlino announced new stay-at-home restrictions, she booked in to play. 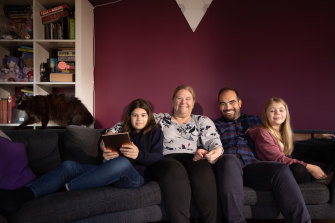 It hasn’t been without its challenges. Richard was in charge of scribing for the team. Richard’s dad can get a tiny bit bossy. Yet they are all coming back for more. Two-time trivia champions for the win.

Our ability to click and connect is strong, says senior innovation officer at the Alannah and Madeline Foundation Dan Donahoo. As soon as the pandemic broke out last year, Donahoo began This Digital Home, a project to document the way in which Australian families used technology to stay connected.

“The question families asked most was: ‘We are not seeing as many people as we normally see. How can we address that?’,” said Donahoo.

He says as a result parents had far fewer rules around screen time because they could see their children were using technology for good, to stay in contact with friends. Donahoo also said in some cases families used technology during lockdown to renew contact with family members with whom connection had been lost.

The Australia Institute research also reveals we are worried about what happens when the going gets tough. One in three of us say we have no one to lean on in times of trouble, up from one in four in 2020 and one in five in 2011. There are actions policy makers can take to ensure we remain as connected as possible, says Andrew Giles, co-chair of the Parliamentary Friends of Ending Loneliness; and that’s particularly important for groups who might not have access to other resources, including First Nations people, those with different physical and mental needs and those in remote and rural areas.

“Digital modes of connection have become important to tackling loneliness – support groups, online communities, even online choirs . . this also means a lack of online connection can be a barrier to people maintaining social connections and [services],” he says.

Deputy director of the Helen Clark Foundation Holly Walker told the Australian Institute technology has been a key connector so governments must ensure consistent access: “Make sure people have enough money to close the digital divide, to help communities do the magic, because that’s where a lot of that social connection really does happen.”

That is precisely how the Piano Bar in Geelong sees itself. Last year, it livestreamed 100 days straight of performances during lockdown. As soon as news broke on Thursday, the team went into overdrive. Andy Pobjoy and Aaron Skinner who run the bar have decided to livestream during each night of the current lockdown and give viewers the chance to make song requests.

“We are doing all we can to keep the community connected,” says Skinner.

And in the Keele family, the new rules of lockdown continue.

Fiona says: “We did have rules and we loosened them a little bit because we wanted them to have connections with their friends.”

As soon as this announcement was made, Ella, 10, who goes to Kingston Heath Primary, told her mother: “My friends and I are going to do video calls every day.”

The family also has two uncooperative cats but it turns out cats don’t protect from loneliness. New Australian research show cat owners living alone were found to be less mindful than non-owners and pet interactions did not account for levels of loneliness or levels of mindfulness. You need a dog for that.