Wine DOES get better (for you) with age: A glass a night is good for the elderly – but not for anyone else

A glass of wine a day can be good for you – if you’re older than age 50, a new study finds.

Researchers found a tipple here and there did wonders for offsetting age-related diseases that emerge in middle age – including coronary heart disease, dementia, diabetes, stroke and osteoporosis.

In fact, alcohol prevents about 1,500 deaths a year – and the team at Boston Medical Center in Massachusetts found that 80 percent of those are among adults age 65 and older.

This is in spite of how we’re told to avoid alcohol because of its harmful effects, including causing breast cancer, pancreatitis and liver disease. 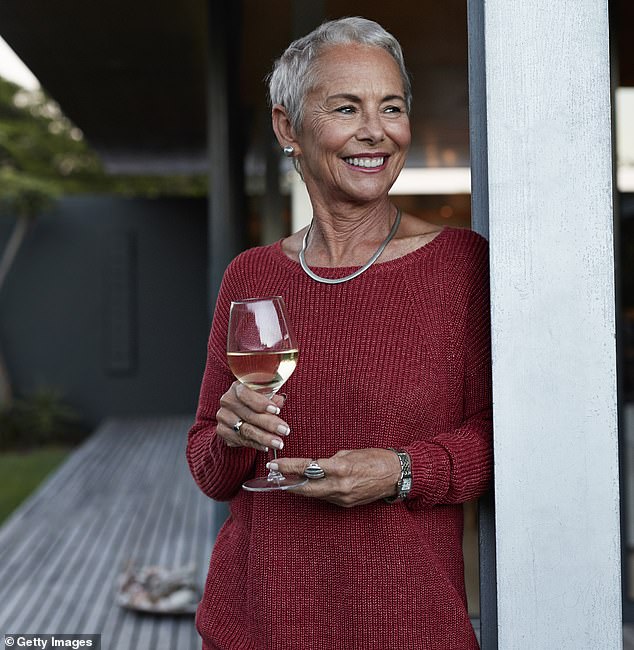 ‘Up until about 10 years ago, there was this belief that alcohol was good for you,’ Dr Naimi told DailyMail.com.

‘It’s not that alcohol can’t be enjoyed. It’s one thing to say that and another thing to allege it’s good for your health.’

He went on to explain that people in the US begin drinking by their early 20s, but many studies on drinking don’t enroll people until they’re in their 50s.

The main problem with this is that 40 percent of deaths due to alcohol occur before age 50.

This is from a number of issues including gastritis, breast cancer, liver cancer, hypertension and prostate cancer.

‘This shows that people who live to age 50 and drink presently are “survivors” – if you will – of their drinking,’ Dr Naimi said.

‘They might have been healthier or have had safer drinking patterns. They’re not an appropriate group to compare to non-drinkers.’

For the current study, the team looked at data from the Alcohol-Related Disease Impact Application.

Run by the Centers for Disease Control and Prevention, the database estimates deaths and years of potential life lost related to alcohol between 2006 to 2010 in the US.

Researchers found that when it came to alcohol related deaths – from conditions such as liver disease, stroke and pancreatitis – age played a major factor.

Nearly 36 percent of deaths caused by alcohol consumption were in people between ages 20 and 49.

But in deaths that were prevented by consuming alcohol in this age group, it was only 4.5 percent.

When it came to people aged 65 and older, a similar 35 percent of deaths were caused by alcohol.

But there was a huge spike in deaths prevented by alcohol among senior citizens at 80 percent.

Dr Naimi said this is due to the beneficial effects alcohol can have – particularly for cardiovascular diseases and cholelithiases, also known as gallstones.

Previous studies have shown that drinking small amounts of alcohol lower the amount of cholesterol levels in bile, thereby reducing the risk of gallstones developing.

In people above age 65, about 15 percent of years were lost.

Dr Naimi said the results show younger people ‘are more likely to die from alcohol consumption than they are to die from a lack of drinking’.

However, older people are more likely to see the health benefits of moderate drinking.

According to the Mayo Clinic, moderate drinking means no more than one drink a day for women and men above age 65.

That’s about 12 ounces of beer, five ounces of wine and 1.5 ounces of distilled spirits.

Benefits may include reduced risk of heart, and possibly lowering the risk of stroke and diabetes.