A 4-year-old girl in Maryland was reportedly given the first dose of the COVID-19 vaccine by mistake, instead of the seasonal flu shot she was scheduled to receive at her local pharmacy.

According to the Baltimore Sun, Victoria Olivier brought her daughter to get the flu vaccine this month, though a Walgreens pharmacist had instead administered an adult dose of the Pfizer COVID-19 vaccine, which has not yet been approved by the Food and Drug Administration (FDA) for children under 12.

Phil Caruso, a spokesperson for Walgreens, told Fox News in an email that patient safety is the company’s “top priority.”

“Events like this are extremely rare and we take this matter very seriously,” Caruso wrote in a statement. “We are in touch with the patient’s family and we have apologized. Our multi-step vaccination procedure includes several safety checks to minimize the chance of human error. We’ve recently reviewed this process with our pharmacy staff in order to prevent a future occurrence.”

The error comes as children under 12 remain ineligible for the vaccine, though Pfizer-BioNTech has submitted clinical trial data from a COVID-19 vaccine study among kids ages 5-11 to the FDA, the companies announced Tuesday. A request for emergency approval is anticipated to follow in the coming weeks, Fox News reported. Trial data included findings among 2,268 participants ages 5-11, which suggested the smaller dose shot was safe, well tolerated and resulted in neutralizing antibody responses. 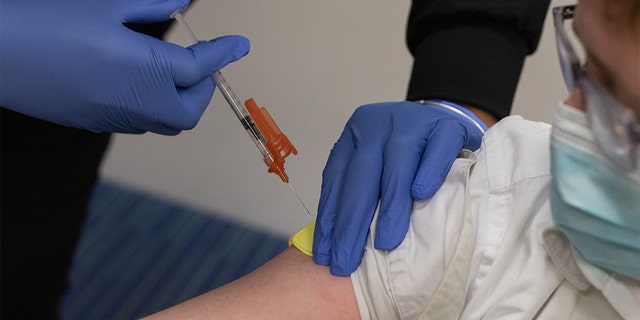 A healthcare worker administers a dose of a Pfizer-BioNTech Covid-19 vaccine to a child at a pediatrician’s office in Bingham Farms, Michigan, U.S., on Wednesday, May 19, 2021. Anthony Fauci, head of the National Institute of Allergy and Infectious Diseases, said in a MSNBC interview that he expects all children will be eligible for a Pfizer-BioNTech Covid-19 vaccine by the end of the year. Photographer: Emily Elconin/Bloomberg via Getty Images
(Emily Elconin/Bloomberg via Getty Images)

Olivier told the Baltimore Sun she and her family were “stunned” by the incident. They had apparently dialed a 24/7 nurse’s hotline, Poison Control and contacted Olivier’s network of social media friends for help. So far, the child has had no major side effects, the news outlet reported.

“The vaccines, the way they change between age has a lot more so to do with the dose,” said Panagis Galiatsatos, MD, MHS, assistant professor, of Division of Pulmonary & Critical Care Medicine at John Hopkins.

Galiatsatos told Fox News that when child is given a higher dose, the result is that the probability of side effects will increase.

“It got our attention, [the] human error, now we investigate how likely the dire outcome is,” Galiatsatos said, adding the probability of harm is low.

“Close monitoring, making sure the child follows up with their healthcare professional – that is what I would recommend,” he added.

“There’s been errors in medicine that have been brought into the spotlight, which makes the next one preventable,” Galiatsatos said.

In a statement to Fox News, the FDA reminded that it has not “evaluated data pertaining to the safety and effectiveness” of the Pfizer vaccine for use in children under 12, nor has it approved or authorized emergency use of the vaccine for that pediatric population.

“We are glad to hear that the child is doing well and hope that she eventually received her flu vaccine,” the spokesperson wrote in an email. “As per the vaccination provider agreement, it is mandatory for vaccination providers to report vaccine administration errors whether or not associated with an adverse event to VAERS [The Vaccine Adverse Event Reporting System].”

The Olivier family is reportedly not planning to file a complaint with the Maryland Board of Pharmacy.